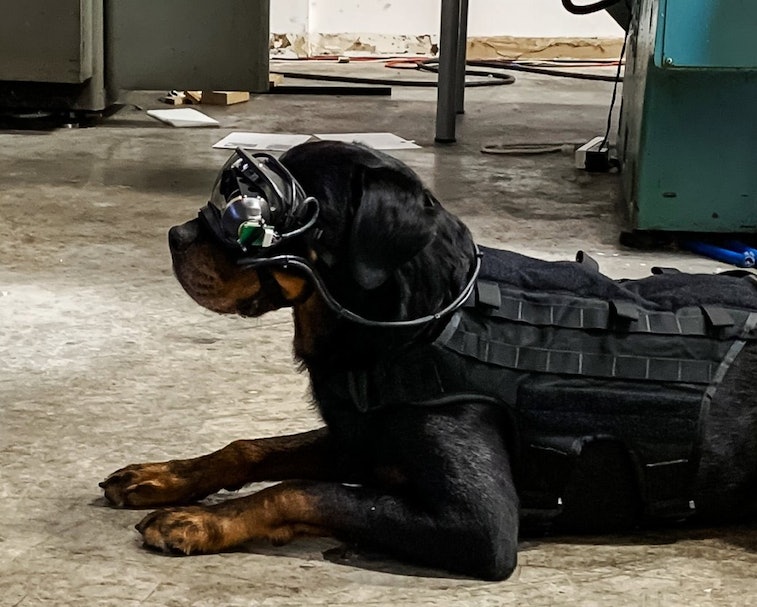 Seattle-based Common Sight has created augmented reality (AR) goggles for military dogs. Funded by the Small Business Innovation Research (SBIR) program and managed by the Army Research Office (ARO), the goggles will allow handlers to provide directional commands without being near the dogs. The Army Research Office is part of the Combat Capabilities Development Command’s Army Research Laboratory.

Why do dogs need AR? — Military dogs are typically sniffing out explosives and other hazardous materials, but they rely on commands from their handler. Close proximity can put the handler in danger, both from toxic or explosive substances and visual exposure to the enemy. Walkie talkies are also used for verbal commands, but this can sometimes be confusing for the dogs.

These goggles won’t work the same way as Holo Lens or Google Glass; they operate very simply for the dogs. They allow handlers to supply audio commands and visual cues — think of a laser pointer, but with the point displayed in a head-up display — from a safe distance. The learning curve is one thing, but the comfort curve shouldn’t be a problem. Army dogs are used to the sensation of eyewear to protect them from inclement weather and aerial deployments. The goggles also provide handlers with better visuals of what the dog is seeing.

“Even without the augmented reality, this technology provides one of the best camera systems for military working dogs,” Dr. Stephen Lee, an ARO senior scientist said in a statement. “Now, cameras are generally placed on a dog’s back, but by putting the camera in the goggles, the handler can see exactly what the dog sees and it eliminates the bounce that comes from placing the camera on the dog’s back.”

The current research has mostly involved Command Sight founder Dr. A.J. Peper’s rottweiler, Mater and a wired prototype. Peper said in a statement: “His ability to generalize from other training to working through the AR goggles has been incredible. We still have a way to go from a basic science and development perspective before it will be ready for the wear and tear our military dogs will place on the units.”

The goggles are currently in Phase II of the SBIR program and have received additional funding from the Department of Defense Rapid Reaction Technology Office. The Command Sight team will work on prototypes customized to 3D scans of military dogs. It’s no nap helmet, but they’re comparably one-of-a-kind. Researchers plan on spending a couple of more years working on getting the wireless goggles to a production scale level.