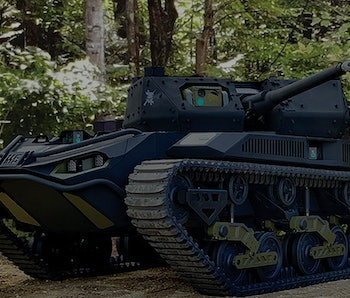 The U.S. Army has issued a draft proposal for a range of new Robotic Combat Vehicles (RCVs), semi-autonomous tanks that would provide an extra line of defense for soldiers on the battlefield. The unmanned tanks are supposed to be able to drive themselves to the frontlines, detect enemies, shoot missiles out of the sky, and withstand heavy fire. One prototype is already in testing.

Terminator, the future — Three variants of RCVs are in development varying by weight — lights, mediums, and heavies, with each supposed to have progressively more firepower and durability. At the far end, the RCV Heavy will act as a wingman driving alongside human-operated tanks, capable of withstanding the same intensity of attack. The lighter weight variants, because they will drive far ahead of the manned force, don't need to be as strong.

The RCV Light will carry just one anti-tank guided missile, but otherwise, it will likely just have a .50 caliber machine gun or a chaingun to fight infantry and unarmored trucks. The RCV-Medium is more much like a regular tank, carrying two anti-tank missiles and a high-velocity 30mm autocannon that can fire armor-piercing explosive shells to kill light armored vehicles.

The Army wants these tanks to be modular with the ability for soldiers to quickly swap in new technologies and specialized payloads as they become available. The most important payload that soldiers have requested is defense against small drones, which are increasingly being used by adversaries to drop hand grenades and spot targets for artillery fire. Other requests including radio jammers and a "deathzone detector" that can warn troops of chemical or nuclear contamination.

Dangerous precedent — For now, the Army says it wants a human pulling the trigger on the weapons. The tanks will be able to drive themselves to the battlefield, but someone will remotely operate the weapons from afar. That's not exactly reassuring, especially considering an embrace of the U.S. unmanned drone program under Obama, who oversaw horrific killings of innocent people, including a CIA drone strike on a funeral in Pakistan that killed as many as 41 civilians. While keeping soldiers safe using remote control sounds good, drones are criticized for being inherently more dangerous for civilians on the ground because it's not possible to know exactly what's happening from a distance, and the decision-making threshold is lower.

But once one country has the technology to remotely operate unmanned death machines, it's hard to put the genie back in the bottle.

More like this
Ian Campbell
5.16.2022 5:45 PM
Tech
Uber is piloting two types of robotic food deliveries in Los Angeles
Matt Wille
4 hours ago
Tech
New York is giving robots to older residents to combat isolation
Jackson Chen
5.25.2022 4:05 PM
Tech
Dyson is working on chore-bots that can pick up after us