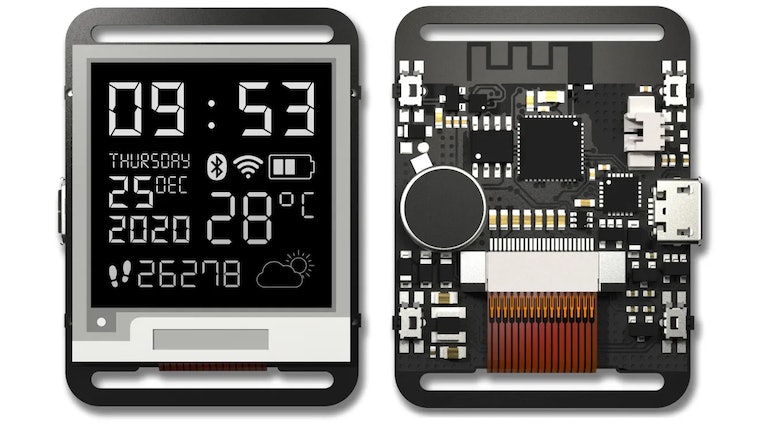 Nowadays the smartwatch market mostly consists of the Apple Watch and an assortment of niche Google Wear-based smartwatches. There's not much an Apple Watch can't do at this point — especially with a cellular model you can leave the house without even bringing your phone.

For those who want something simpler, a watch first and foremost with some useful features thrown in, there is a new answer. The Watchy promises to be everything the much-beloved Pebble was and more. At $45, the Watchy is essentially just a low-powered monochromatic LCD screen and a battery — you have to tape the two pieces together, and you need to bring your watch enclosure and watchband. The Watchy's OS supports a barebones set of features, like reading notifications from your phone and checking the weather.

Simplicity — For a certain cohort of people, the do-everything nature of the Apple Watch is the opposite of what they want out of a smartwatch. They want a watch that tells time and can also display alerts from their phone. And they want it in a package that doesn't need to be charged every night. That's what the Pebble smartwatch was lauded for — it wasn't trying to do everything, it just sought to do a few things well.

The company had a loyal following because it started as a Kickstarter campaign, and supporters felt like they were along for the journey of this plucky little smartwatch maker trying to carve out a niche for itself outside of a giant company.

But sadly, hardware is a difficult business and Pebble struggled to make the economics work after it overextended itself on developing new models and ran out of money. It sold its assets to Fitbit in 2016 and went out of business. Fitbit itself recently sold to Google because fitness tracking became a standard feature in smartwatches and it no longer stood out. Neither Pebble nor Fitbit could compete against the marketing and R&D power of Apple. The $279 Apple Watch SE is hard to beat.

Customization — Pebble was too ambitious for its own good, but the Watchy could succeed because it's the opposite. It doesn't have a slick package like the Pebble Time Round, and there's no app store. You're just getting a circuit board and a battery. But if you're willing to put in a little work, you can create a comparable experience to what you'd get from a Pebble.

The Watchy is made by a company called Squarefumi, which is releasing designs for 3D-printed cases you can download to snazz it up. The company is also promising to release extensive developer documentation so that you can make the Watchy do anything you want. It includes Wi-Fi, Bluetooth for wirelessly connecting to a smartphone, and a vibration motor for haptic notifications. If you're decent at programming then the Watchy could at least make for a good hobbyist toy. On its website, Squarefumi will soon allow community members to share their apps and watchfaces for anyone to download.

The Watchy is currently sold out, but you can add your name to the waitlist to learn when it's available again.