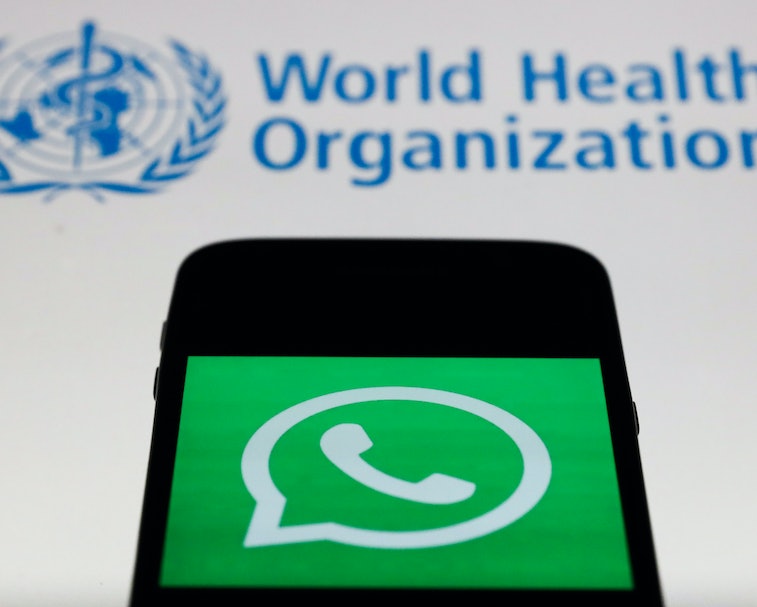 Last week, the World Health Organization (WHO) announced it would roll out its Health Alert to the world. The service was first tested in South Africa, where WhatsApp users can follow a link that opens a chatbot in the messaging service that's loaded with the latest coronavirus information and updated daily. Bloomberg reports 10 million people have used the service since its launch on March 20, and the WHO says it hopes to reach 50 million people with the service.

How does it work? — After following the link, typing “Hi” triggers a series of prompts that disseminate the most up-to-date information to the user. Users can either send a corresponding number or emoji to get the information they need. The service was developed with Praekelt.org, the non-profit that launched it in South Africa, using Turn machine learning technology. Praekelt has previously run text-based information services for expectant mothers that could be used on feature phones.

Dr. Tedros Adhanom Ghebreyesus, Director-General of WHO said in a statement: “Digital technology gives us an unprecedented opportunity for vital health information to go viral and spread faster than the pandemic, helping us save lives and protect the vulnerable.”

The service launched in English, but versions in more than 20 languages are expected to arrive in the next few weeks with Arabic and Spanish arriving this week.