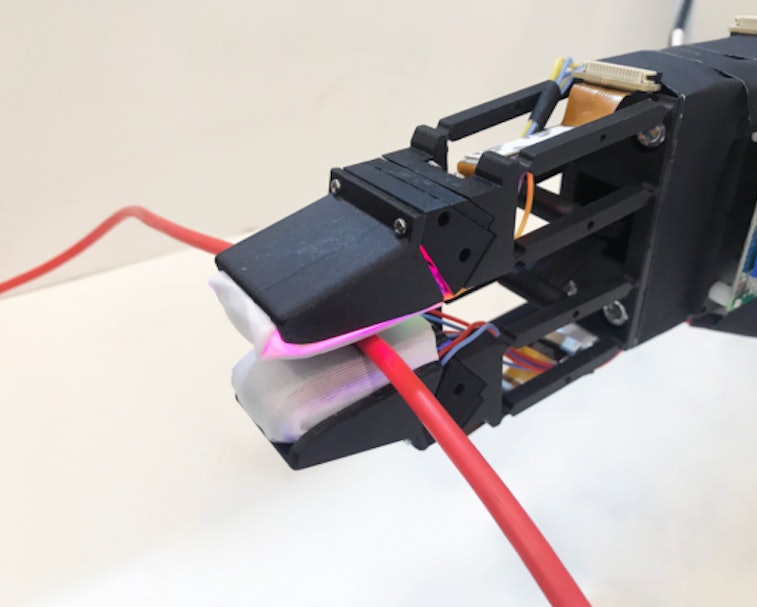 Robots are notoriously bad at handling thin, flexible objects like wires and ropes. Building robotic fingers capable of that kind of dexterity is just verging on the impossible. It’s difficult enough for human fingers to work their away around strings.

Thankfully researchers at MIT are up to the task. A group from MIT’s Computer Science and Artificial Intelligence Laboratory (CSAIL) is looking at the problem from a different angle than usual, utilizing soft robotic fingers that mimic the movements of human ones.

Okay, so they don’t exactly look like fingers. That may be for the best, given that realistic fingers would really only serve to make the robot appear incredibly uncanny. But the soft grippers are dextrous enough to carry out many of the same tasks as human fingers, making them useful for tasks ranging from menial to life-or-death.

Specialized sensors — In seeking the perfect finger-machine, researchers turned first to the design of the gripper itself. They settled on a simple but effective design with two quick-moving “fingers” that allow for real-time adjustments of force and position.

Then came the more difficult part: telling those grippy fingers how to move. Cables and strings are so fluid in their movements that handling them requires complex deftness. For this purpose, the researchers equipped the fingers with “GelSight” sensors that use a combination of vision and tactile inputs. Those connect back to a complicated perception-and-control framework to make cable manipulation possible.

Almost endless applications — While the robotic fingers themselves are highly specialized, their applications are not. In fact, the fancy fingers could be put to use in a huge variety of situations.

For example, the fingers could be used by disabled or elderly people to complete household tasks such as folding clothes. The robotic fingers could also be implemented in a number of factory settings where repeated tasks might become uncomfortable for human hands.

Still room for improvement — The grippers are in great shape right now, but its creators know they could still be much better. Because of the convex surface of the GelSight sensor, it can be difficult for the robot to pull material back once it’s reached the edge of the finger — they hope to improve the finger’s design in future iterations to enhance overall performance.

The team’s also hoping to train the robotic fingers to carry out even more complex tasks in the future, such as cable-routing and cable-insertion through obstacles. The arm could then be of huge assistance in jobs like internet and cable installations.