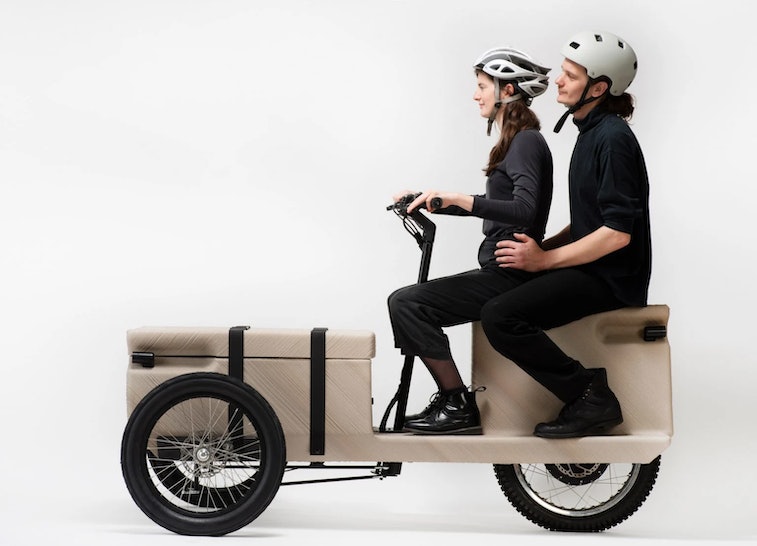 A design firm in Austria has created a prototype for an electric tricycle that can carry two people along with cargo, and which was 3D-printed using plastic packaging waste from supermarkets.

The firm’s calling the vehicle a ZUV, or a “zero-emissions utility vehicle,” because it was designed in such a way that it’s environmentally friendly all the way down to the manufacturing. By 3D-printing the tricycle using locally sourced waste, fewer resources are wasted throughout the production process. Most bikes are manufactured somewhere like Asia, for instance, and shipping alone uses heaps of energy.

EOOS, the firm behind the tricycle, envisions cities around the world having their own ZUV production facilities. Once the bike frame is printed, a user could take it to a bike shop where a motor would be bolted at predefined positions.

Circular economy — "We wanted to design around local, affordable production," EOOS founder Harald Gründ said in an interview with Dezeen. "Because of the high labor costs in Europe, almost every bike frame is produced in Asia. But we want a local ZUV production facility in every city around the world."

This model would also make it easy to repair the bike close to home and extend its lifespan, again further limiting environmental impact. Since the ZUV is made from recycled plastic, the frame could be shredded and re-printed to form another ZUV, instead of sent to a landfill (though, eventually, the plastic would likely degrade too much for reuse).

"Service schemes with a designed 'take back' will be the future,” Gründ said. “And it's way easier to close the loop if you do it locally rather than sending around ships full of waste as we do today, which is stupid."

The ZUV prototype can carry two adults on its bench seat, with a transport box on the front for cargo.

Truly zero emissions — A common refrain is that electric cars use a lot of material that’s hard to recycle, and they’re powered by electricity that’s often coming from a dirty power grid. But the ZUV is small and lightweight, meaning it uses less energy.

"A lightweight vehicle has the benefit of having less effort in the production but it also uses less energy to transport people," Gründ added. "The more sustainable you want to make a mobility system, the less weight it should have."

Recently published research has found that electric cars don’t pollute as much as gas ones, even if they’re pulling from a dirty grid, but that shouldn’t put anyone off this novel idea.

Despite its name, the ZUV isn’t totally zero-emissions. The process doesn’t account for the energy used to create the plastic it’s made from. And you still have to charge the battery from a power grid. But it’s an interesting concept nonetheless, if a bit goofy looking. EOOS created it for the MAK Climate Care exhibition as part of the Vienna Biennale for Change.