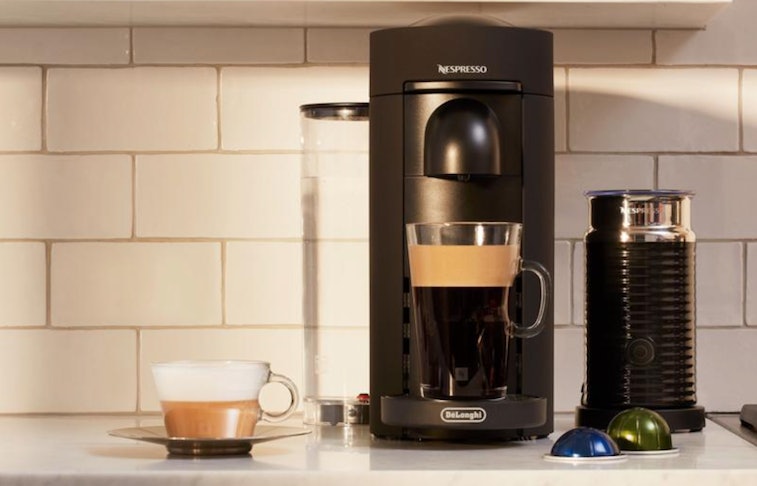 It’s no secret that the Input team takes coffee very seriously. From French presses to pour overs to cafe-level espresso machines, we run the gamut of Damn Fine Cups of Coffee. Of course, sometimes you just want to mainline caffeine without time-consuming methods or counter-hogging devices.

When it comes to coffee pods, Nespresso capsules tend to have more diehard fans than Keurig, but the machines needed to use them are typically more expensive. But this weekend, Macy’s is selling a De'Longhi Vertuo Plus Deluxe Coffee & Espresso Maker at 47 percent off, bringing it in at a lower price than several high-end Keurigs. This Nespresso machine comes with an attractive frother and 12 capsules to get you started as soon as you open the box.

Take it easy — There’s never really a need for coffee snobbery, but it especially has no place in one of the most chaotic moments of recent history. As solid sleep schedules evade many, coffee is an even more magical elixir than usual, so why not jump on the pod bandwagon?

There are two kinds of Nespresso machines, Original and Vertuo, with the former brewing espresso and the latter adding coffee capsule compatibility. Vertuo machines like this one automatically detect whether you’re using a coffee or espresso capsule, so there’s only one button to press. The pods dictate how much is brewed, from single to double espresso shots to up to 14 ounces of coffee. Thankfully, this bundle includes a variety pack of Nespresso capsules so you can figure out which blends you like before committing to a specific pack. Pro tip: the blue Odacio coffee capsules have a cult following. For even more convenience, the water tank is removable and adjustable for easy refills.

The included Aeroccino 3 quietly froths milk or your preferred alternative compared to the noisy steam frothers and whirring handheld frothers. If you don’t want to cool your coffee, or need to use more milk for an espresso-based drink, it can also heat its contents.

What’s the catch? — Anywhere from six to twelve months into owning one of these machines, some reviewers on multiple sites report the machine leaking. Those who troubleshoot the issue and/or favorably review the unit claim that cleaning the pod reservoir regularly will prevent this problem. If you don’t want to deal with the maintenance, the upgraded version of this coffee maker is also discounted at Macy’s this weekend — albeit only by 20 percent, putting it around the typical price for this machine.

You have until September 20 to decide which discount to take advantage of and start brewing delicious coffee in less than a minute.