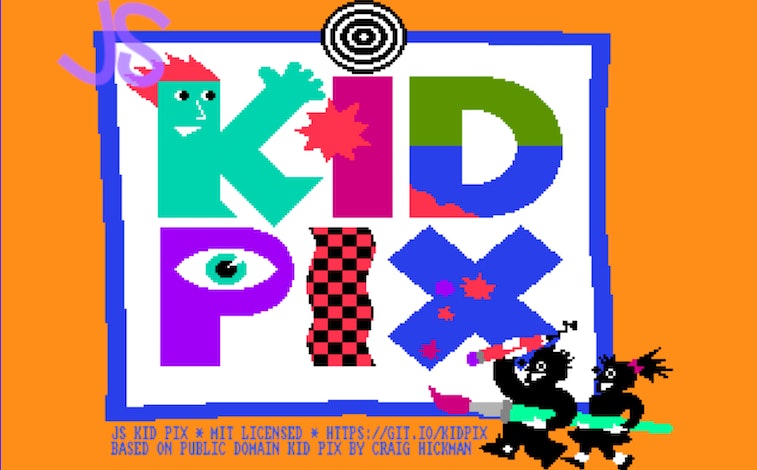 Kid Pix is one of those pieces of early-’90s software that became ubiquitous simply by being fun and accessible. The kids-forward software — first released for Apple’s Macintosh in 1989 by developer Craig Hickman — spent many years on elementary school computers, a treat for young students and teachers alike.

Now all us ’90s kids have a chance to relive the classic drawing software, thanks to a newly ported HTML version created by Vikrum Nijjar.

The web port is just as fully-featured as the original 1.0 version released in ’89. It includes all the drawing tools kids will remember from the original software — and all the amazing, ridiculous sound effects that came with the original, too. The undo button’s Oh no!, in particular, unlocked some very strong memories for me.

The best, worst drawing tool ever — Kid Pix makes for the perfect kind of nostalgia trip because it’s just truly some of the strangest popular software ever designed. It would be very difficult to produce any high art on Kid Pix — and that’s what makes it so delightful.

Nothing modern about it — Kid Pix has existed in various remakes and modern upgrades in the last few decades; most recently, Software MacKiev (which now owns the franchise rights) released Kid Pix 5: The S.T.E.A.M. Edition for Mac, Windows, and iPad. We haven’t played that one ourselves, but it’s obvious from screenshots that it’s only faintly reminiscent of the original software’s lovely, pixel-based chaos.

Before this week, it would’ve been near-impossible to revisit the original Kid Pix experience in all its ludicrous glory. The modern web is not kind to those of us who enjoy reliving the internet’s early days — we’ve gotta enjoy what few tastes of it we’re gifted. Thanks, Nijjar, for the quick respite from 2021.

You can play around with Nijjar’s Kid Pix port at kidpix.app.