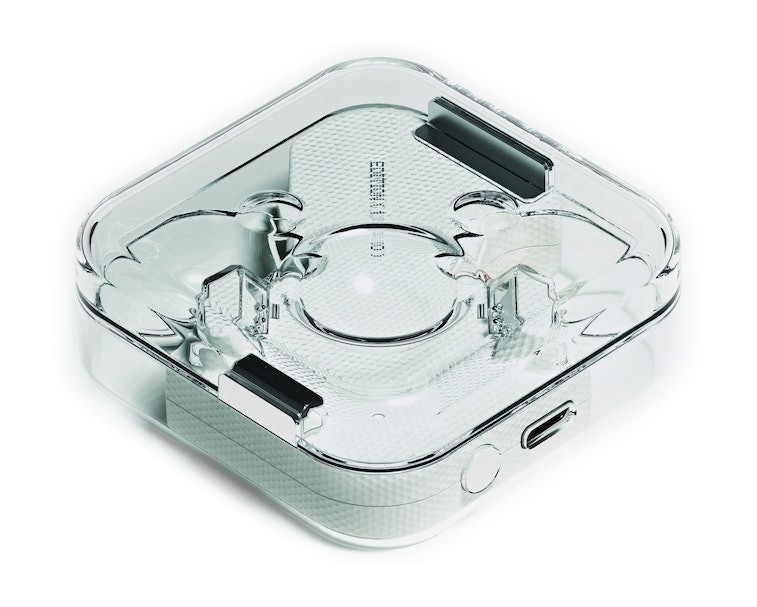 Last week, tech startup Nothing and StockX announced a partnership to auction off the first 100 units of the Ear (1) wireless earbuds. The collaboration gave us a glimpse of a top-down shot of the semi-transparent charging case. Now, we have a much better look at the case.

Shown off in full on StockX’s “DropX” listing, we can see the case’s unorthodox design. Nobody can claim it’s an AirPods Pro knockoff, that’s for sure. There’s a USB-C port and what is presumably a pairing button on one side. Engraved into the center, which doesn’t appear to be transparent, is “EDITION (1 / 100)” to denote the limited edition run ahead of the buds’ launch on July 27.

The case doesn’t reveal any exposed circuitry or the Ear (1) wireless earbuds. There’s speculation that there might not be any (or much) visibility of the components. That would be somewhat of a shame since Nothing’s “Design Concept 1” seemed to suggest that the wireless earbuds would come with Teenage Engineering’s signature exposed industrial design.

Not resembling AirPods is good, but who else is getting Apple EarPods vibes? There’s some resemblance here:

The StockX listing doesn’t provide much in the way of specs, only the usual product puff:

The Nothing ear (1) is a true technological breakthrough, with the first 100 units releasing for the first-time ever via DropX auction. The ultra-lightweight earbuds combine raw beauty and precise engineering for a pure sound experience you need to see and hear to believe. Place your Bid above before the auction closes for a chance to secure one of 100.

At the time of publishing, the highest bid for the Ear (1) is $530 — well above the $99.99 retail price. The craziest thing is that people are bidding on the wireless earbuds even without knowing crucial specs like battery life or sound quality or features (i.e. wireless charging). It speaks to Carl Pei’s ability to attract hype to new products even without anyone having tried them.

Nothing’s even partnered up with Unbox Therapy to give away 50 Ear (1) units on launch day. As with OnePlus, Pei seems to be eschewing traditional advertising in favor of social marketing with YouTubers and influencers. He’s leaning on them to generate hype through strategies such as giveaways. What better way to put rose-colored glasses over everyone’s eyes than by giving away product?