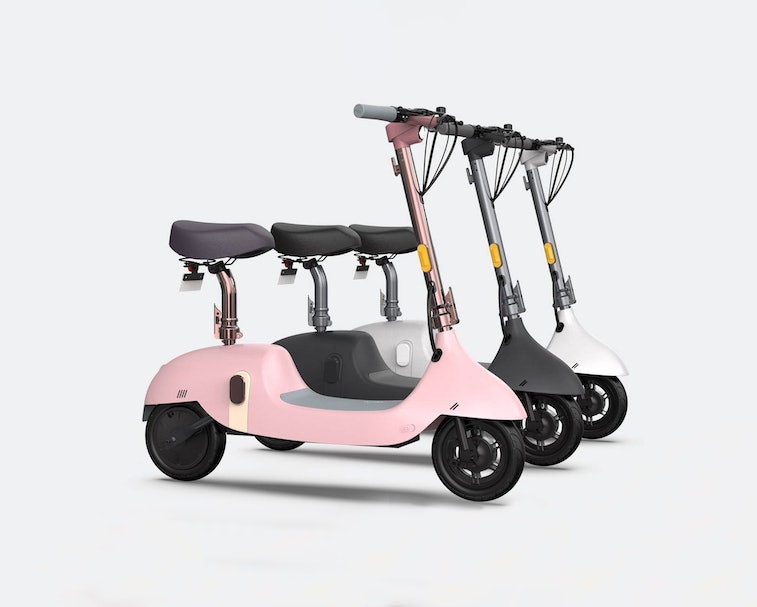 A new seated electric scooter is being released by Chinese-based manufacturer Okai, and this one is notable for its attractive look and high-tech features. Electrek earlier wrote about what’s nondescriptly named the EA10A.

Okai isn’t a commonly known brand, but the company manufactures two-wheeled electric vehicles for some big names. For instance, Bird’s latest scooter, the Zero, is made by Okai.

The EA10A addresses the growing market for lightweight electric vehicles with a sit-down option that’s somewhere between a bike and a moped. With a top speed of 15 miles per hour, it’s not fast enough to ride in traffic. But it also lacks the pedals of a bike, meaning many municipalities will prohibit using one on pedestrian trails. You will be able to use it in the bike lane, though, and without a driver's license to boot.

Portable and storable — The EA10A’s 22 miles of estimated range could make it a nice commuter or around-town vehicle. Okai says that the vehicle weighs just 50 pounds, and both the seat and handlebars can be foldable down to make it easier to carry or store. The EA10A also features an LED screen and NFC so that it can be unlocked with a smart key. In case you can’t bring your scooter inside, the battery can be removed for charging / security.

The EA10A will be available in three colors: cherry blossom pink, dream black, and rural white.

Unfortunately we don’t know pricing or availability (Alibaba quotes a price of $399, but that appears to be for bulk sales to corporations). Electrek says that Okai scooters are popular in Europe, where it operates a German office, and the EA10A will perhaps be sold directly to consumers there. Maybe we’ll see a service like Bird offering them for rental stateside soon.

The e-boom continues — Electric bikes and scooters have boomed in popularity during the last two years as people look to get outside and reconsider the way they get around. Go to just about any city and you’ll see people cruising on everything from e-scooters and e-bikes to OneWheels and electric unicycles. Services like Bird and Lime have shown the public how fun riding an e-vehicle can be, and cities have come to appreciate them as a complement to underfunded public transit and a way to reduce congestion and emissions.