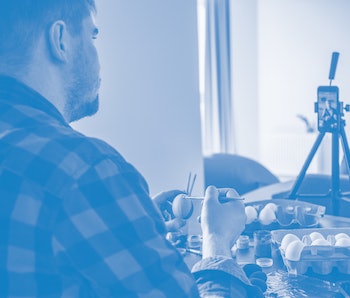 TikTok is today rolling out a new automatic captioning feature for videos created in English and Japanese, with support for more languages to follow in the near future. The feature is superb from an accessibility standpoint and really pole-vaults TikTok far above accessibility offerings from competitors like Instagram and Facebook.

TikTok has made the new feature very easy to use — just turn on captions and let the app’s artificial intelligence convert your audio to text. The option to turn on auto captions will show up in a video’s editing page once it’s been uploaded or recorded. And, yes, you’ll be able to edit the captions after they’ve been generated. Users will be able to turn the captions on or off while viewing a video.

The feature has big implications for those who are hard of hearing or deaf. TikTok relies heavily on audio for its uniquely chaotic social media experience, and captions are absolutely essential in making these videos digestible for those with difficulties hearing. And for the able-bodied, the auto captions will just make it easier to understand what’s being said in that viral video.

Pushing for accessibility — In today’s announcement, TikTok also speaks to its ongoing commitment to the app’s overall accessibility. Right now, the company says, it’s in the process of undertaking an accessibility assessment to identify which parts of the app could be made more accessible. TikTok is working with organizations like The Deaf Collective to make its work as inclusive as possible.

TikTok introduced a number of great accessibility features last year, including warnings for both creators and viewers about content that could trigger photosensitive epilepsy. The app also introduced a text-to-speech feature last year — essentially the opposite of its auto-captioning feature, which converts speech to text.

TikTok keeps raising the bar — TikTok is immensely popular, especially amongst younger generations, and other social media companies absolutely cannot stand it. Everyone wants what TikTok has — a captive audience — and they’re rushing to keep up.

Instagram, for example, has been releasing direct copycat versions of TikTok features months (or even years) later. Adam Mosseri, the company’s head, has even admitted that Instagram’s features are lagging behind. “We’re growing both in terms of how much people are sharing and how much people are consuming,” Mosseri said earlier this year, “but we have a long way to go. And we have to be honest that TikTok is ahead.”

Accessibility isn’t the only sector where TikTok has consistently raised the bar. The app is leagues ahead in terms of warning users about potentially misleading information and protecting its youngest users, too. We’re all for Instagram copying TikTok if it means keeping users safe.

The auto caption feature begins rolling out today in American English and Japanese. Additional languages will be available “in the coming months,” TikTok says.