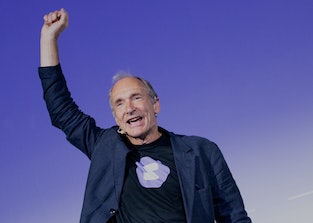 The money Tim Berners-Lee made selling an NFT version of the web's source code.

Tim Berners-Lee, the creator of the internet as we know it, just netted $5.4 million selling an NFT collectible version of the source code behind the world wide web. The sale was completed through Sotheby’s and went to an anonymous buyer.

World-changing invention — The windfall sees Berners-Lee finally get direct compensation for his formative work. Not to be confused with the internet, the world wide web is the system of webpages and links that make them navigable to everyday users. Without the web, the internet would just be accessible through a command line and lack all the rich media one is able to access, like YouTube videos and GIFs of cats.

Berners-Lee created the first web browser in 1989, and in 1993 the technology was put into the open domain, meaning he held no patents on the web and was never able to directly charge for his invention.

Of course, this sale isn’t going to make the internet private. What Berners-Lee sold was merely a copy of the web’s source code along with a one-of-one signature from himself. NFTs are essentially digital autographs, unique cryptographic keys that cannot be replicated.

"I’m selling a picture that I made, of what the source code would look like if it was stuck on the wall and signed by me,” Berners-Lee told The Guardian at the time the auction was announced.

NFT hype train — Some people have a hard time understanding NFTs, but the basic idea is to imbue value on digital works by creating scarcity. Any digital file can be replicated infinitely, but an NFT, or non-fungible token, is a cryptographic key that’s recorded on a permanent ledger where its ownership is tracked as it goes from Berners-Lee to a buyer, and so on and so forth. With each key being unique, only one person at a time can say they own Berners-Lee’s NFT version of the source code to the web.

Many NFT sales have looked more like get-rich-quick schemes by celebrities who could peddle fairly unimaginative pictures or other files. Jack Dorsey, for instance, netted $2.9 million selling a signed copy of his first tweet, while Azealia Banks sold an audio sex tape (yes, really).

Proponents of the technology, however, hope it will provide artists with a more sustainable way of making a living than relying on advertising or other tricky monetization options. A creator’s biggest fans may be willing to buy one-of-a-kind unique pictures and keep them as collectibles.

Still, it remains to be seen if buying digital art — something you can’t actually hold in your hand — is a fad or here to stay in the long run. There’s reason to be happy for Berners-Lee, though, who did a noble thing by creating the web and providing it to the masses for free, rather than making it a proprietary technology only for those who could afford to pay. Now he’s finally gotten his dues.