“We can use [AR] to enhance our discussion, not substitute it for human connection, which I’ve always deeply worried about in some of the other technologies.” 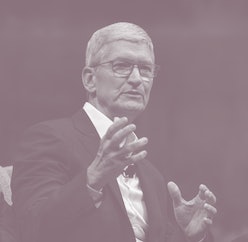 Apple CEO Tim Cook talked up the potential of augmented reality during an interview yesterday in Dublin, where he was accepting an award in recognition of Apple’s 40-year presence in the country. The Apple CEO is a frequent booster of AR technology despite the fact that it’s not yet in wide use, besides rudimentary demo apps.

Weird but OK — “I’m excited about AR. My view is it’s the next big thing, and it will pervade our entire lives,” Cook said, according to Silicon Republic. Cook noted several potential applications for the technology, such as providing instructions for performing an oil change overlayed on top of the car. “You and I might be talking about an article and using AR we can pull it up, and can both be looking at the same thing at the same time,” he added. I’m not sure why you’d want to look at an article that way, but sure!

Apple has invested significant resources into AR, including through the development of its ARKit platform that enables developers to easily create AR apps. The company is rumored to be incorporating a new “time of flight” sensor into the next iPhone that will enhance the camera’s ability to capture depth and render 3D objects. It’s also long been rumored to be developing AR glasses, with Bloomberg reporting those will come sometime around 2023.

AR, like VR, hasn’t really gone mainstream yet — Outside of the gaming space, pretty much the only AR application that’s found success is Measure — which literally allows you to measure real-world objects using your phone camera. But Cook said in the interview that he thinks AR has more potential than VR because that technology is an isolating, captive experience. “We can use [AR] to enhance our discussion, not substitute it for human connection, which I’ve always deeply worried about in some of the other technologies.” Facebook has taken the other side of the bet, investing heavily in VR through its Oculus business.

Cook also used the interview to touch on Apple’s initiatives in the healthcare space, particularly the Apple Watch and its ability to monitor a user’s heart rate for irregularities — which makes it more immediately useful than AR. He believes this type of technology can help identify health concerns before they progress too far, reducing healthcare costs in the process.