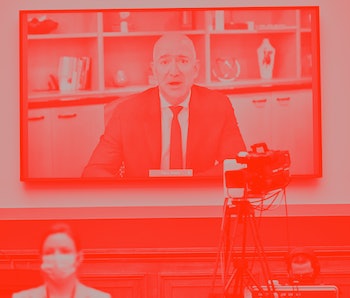 After about an hour of technical difficulties which gave new meaning to the word "irony," the delayed, sixth edition of the House of Representatives' hearing on Online Platforms and Market Power on Wednesday got underway for what should have been easy pickings for Congress. After all, it’s hard to defend insatiable corporate greed, shady data collection policies, and pretty much every single thing Jeff Bezos does. And some representatives are stepping up to the task.

"As gatekeepers of the digital economy, these platforms enjoy the power to pick winners and losers and shakedown small business, and enrich themselves while choking off competitors," Antitrust Subcommittee Chair Cicilline said at the opening of the hearing. "Their ability to dictate terms, call the shots, upend entire sectors, and inspire fear represents the powers of a private government."

A whole lot of nothing — All in all, none of the tech giant billionaires appear in any way capable of truly pushing back on allegations of antitrust violations and unethical, potentially dangerous means of data aggregation. Between Mark Zuckerberg falling back once again on absurdly framing Facebook as The Little Guy while Jeff Bezos all but admits to using third-party private data to buy up competitors, these men have proven time and again that they will do all they can to skirt around antitrust laws.

And Congress isn't having it. “Facebook saw Instagram as a threat that could potentially siphon business away from Facebook, and so rather than compete with it, Facebook bought it,” Rep. Jerry Nadler said. “This is exactly the type of anticompetitive acquisition that the antitrust laws were designed to prevent. This should never have happened in the first place, it should never have been permitted to happen, and it cannot happen again.”

Google, too, could not argue its way out of the grilling. Asked about whether Google steals content from other businesses, CEO Sundar Pichai fumbled through a response about how the company is “focused on giving users what they want.” Still not really answering the question, he added, “We conduct ourselves to the highest standard.”

There’s no app for managing ineptitude — While Democrats have been grilling the Apple, Google, Facebook, and Amazon CEOs on their long-calculated Internet domination, though, Republicans appear to be far more concerned with why they don’t have more likes on their campaign profiles. Almost anytime the questioning was yielded to Republicans, the hearing suddenly found itself spiraling into Big Tech conspiracy theories on silencing conservative voices.

“I’ve been in elected politics for ten years. When I was in the Florida state senate, I never had any problem with emails being marked as spam and going to junk folders,” griped Rep. Steube at one point, “…and suddenly, I get elected to Congress, I’m up here in Washington DC. My parents have a Gmail account aren’t getting my campaign emails. This appears to only be happening to conservative Republicans.”

The absurdity of shadow-banning doesn’t need to be delved into yet again here, but House Republicans couldn’t get enough of their anecdotal claims of Gmail subversion, search blocks, and liberal tech bias. What they don’t seem to realize is that even if, for the sake of argument, some kind of bias is occurring at these corporations, then it’s also in Republicans’ best interest to help break up Big Tech monopolies by going after easily proven antitrust violations.