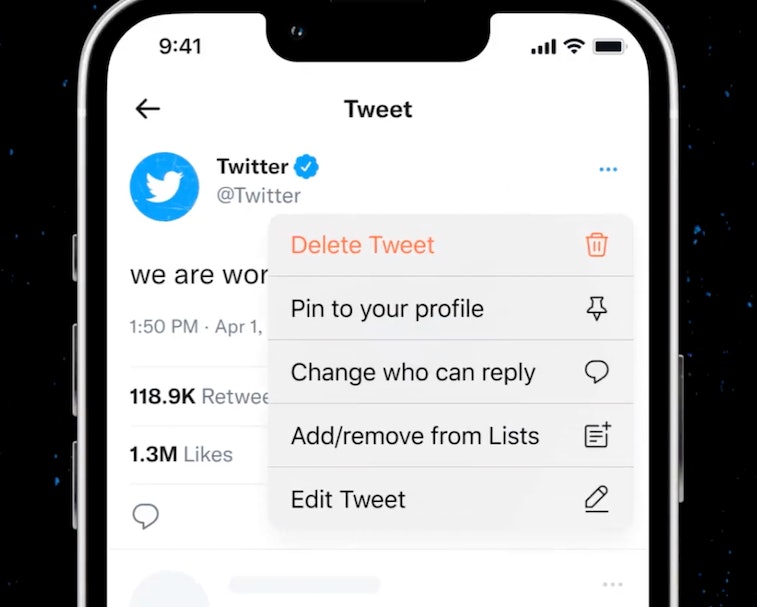 Twitter announced on Tuesday that it’s working on an “edit Tweet” button, a long requested feature that until very recently the company seemed to have no intention of ever implementing.

Editable tweets — In a short clip shared with the announcement, Twitter showed “Edit,” alongside the usual delete and pin options, listed in the drop down menu you can access when you tap on a tweet’s three-dot menu.

It’s not clear what editing will look like beyond that, but we should know more soon. Twitter says it’s rolling out editable tweets to Twitter Blue subscribers through its Labs feature in the coming months.

The company first announced that it was working on editable tweets on April 1.

“We’re working on an edit button,” was all the tweet said. Naturally, given the day it was posted, most people assumed the company was joking. Twitter’s announcement is clear in noting that recent investor and board member, Elon Musk, had nothing to do with the feature, despite what his recent Twitter poll would suggest. It’s been in development for the last few months.

An edit button is just the latest in a collection of new abilities the social media platform has acquired over the last two years, the live audio feature Spaces being the most prominent. It also marks a major departure in terms of policy. Former CEO Jack Dorsey long held that editable tweets could lead to the meaning of popular tweets changing over time. A simple recipe for misinformation.

Other social media sites allow for posts to be edited after the fact (Facebook posts for example) and it seems like Twitter’s new CEO Parag Agrawal thinks Twitter can get away with the same thing.