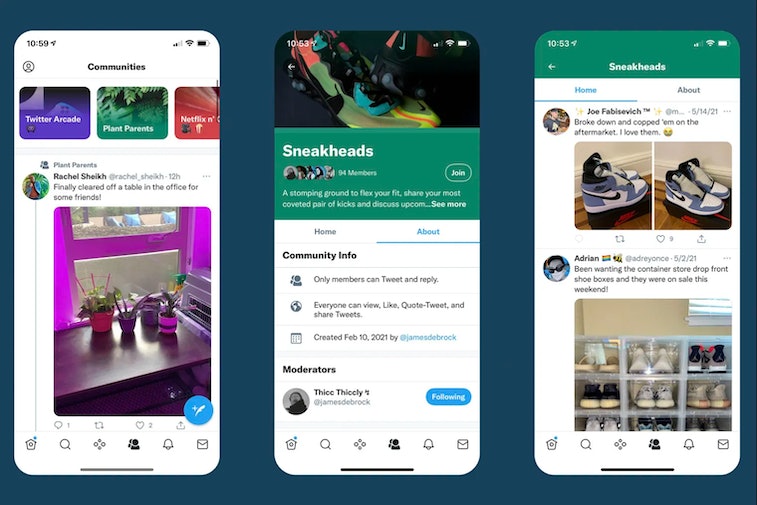 Twitter is launching Communities, groups where users can talk with others about specific interests. The feature is a clear rival to Facebook Groups or Reddit, and could help newer users who have a hard time finding people they should follow.

The feature began rolling out yesterday with a set of initial groups like #AstroTwitter, for astronomy-related discussion, and #DogTwitter, which explains itself. Users have to be invited to these groups. Once they join, they can tweet directly to members of the group rather than to all their followers.

Twitter is not allowing just anyone to create Communities for now, but if you have a good idea for a group you can apply to make it on Twitter’s website. The initial groups were created by users who Twitter invited to try Communities out; they also serve as the groups’ moderators.

Casual users — For years, Twitter struggled with how to help new users find people to follow. The app threw users in headfirst and expected them to search for friends to follow or famous people they might be interested in hearing from. But in recent years Twitter has been trying to help users get started, recommending topics to follow and inserting tweets into their feeds that they might like. Communities is another way to help casual users who haven’t spend years carefully curating their timelines, finding people to follow, and culling those they no longer want to hear from.

Finding audience — Communities could be interesting even to power users, however. On Reddit, hyper-specific groups like r/SkincareAddiction give users a place to discuss and find information on very specific topics. If you post a question about a constellation into Twitter’s #AstroTwitter group, you may be more likely to get an answer from someone who is a subject matter expert rather than if you just threw your tweet into the main feed, where it might not be seen by the relevant people.

Twitter says that tweets shared within Communities are publicly visible so anyone can read and quote tweet them, but they won’t appear on a user’s profile — you have to visit the group’s URL to see them. That’s interesting because Twitter is public by nature, and its open discussions are what make it so special. Anyone can discuss and debate with anyone else, going after Elon Musk’s simps in the replies. But being invite-only, Communities discussions are more limited. They could make for more intimate discussions between people who actually make meaningful contributions, though. And tweets from inside Communities can still break out through retweets.

Twitter for years was known as something of a sloth — unlike Facebook, which is constantly introducing new features, Twitter’s app largely remained the same, reverse-chronological feed of tweets from people you follow. But that changed in the past year as it has toyed with slew of new features from Spaces, the audio chat tool, to paywalled tweets and the quickly-killed Fleets ephemeral posts feature.

It’s a welcome change from Twitter, which serves its place in the social media landscape as a place to discuss world events in real-time, with other people who share those interests.