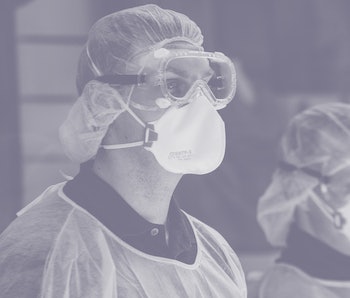 Two weeks ago, Twitter announced that it was making efforts to extend its verification policy to include accounts tweeting credible COVID-19 information. Since then, though many doctors, researchers, and other health professionals have received a blue check, Engadget reports an air of confusion within the medical community about the process persists.

The gray area of blue checks — Since 2017, when Twitter stopped accepting applications for its coveted blue verification mark, the company has quietly doled out blue checks to celebrities and politicians at its own discretion, and without any explanation of how decisions are made. The process is so mysteriously gamified, a teenager suceeded in getting a fake Congressional candidate verified ahead of actual politicians.

We know more about COVID-19 verification than we have about the overall process for the last three years. Users must change the email address connected to their account (which much abide by Twitter’s rules) to their professional email given to them by their organization, institution, hospital, or the like. They should also reference said institution and their profession in the bio section of their Twitter profile for faster verification.

But thereafter things get murky again. Once all of the requisite steps are completed, it’s unclear how eligible users can get Twitter’s attention. A company spokesperson told Engadget that more than 1,000 accounts have been verified since March 20 based on the collaboration of its policy team and “global health authorities.” Twitter is reportedly looking into a public nomination option, too, but the current verification rate bodes well for experts in the meantime.