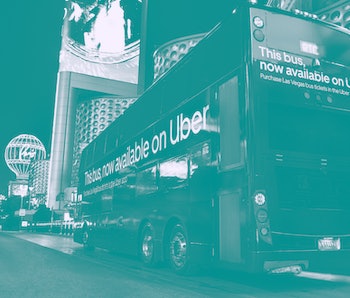 Getting around Vegas at CES this year has a little more variety now that Uber has partnered with the Regional Transportation Commission of Southern Nevada. In addition to seeing transit routes, riders can purchase public transit fares in the Uber app, according to the Las Vegas Review-Journal. The feature is available right now for anyone in town for business, pleasure, or CES and will hit the rest of southern Nevada in the coming weeks.

How does it work? — Once a rider enters their destination, “Transit” will also be an option. If selected, they’ll see complete route directions and can pay for their fare in the app. They can purchase Strip and All Access passes, hourly, residential, and monthly passes. The passes are saved in the “Transit tickets” section, which can be accessed offline and scanned by onboard pass readers.

Uber is gunning for public transit — After disrupting the taxi industry and effectively becoming a somehow worse version of a taxi company, Uber seems intent on getting a piece of the public transit pie. A year ago, they launched the same offering in Denver in an effort to become a “one-stop-shop for transportation in your city.” In between the Denver and Las Vegas partnerships, Uber connected with more than a dozen transit agencies to provide end-to-end directions in its app (without the ability to purchase tickets).

Lyft started working with agencies a few months earlier than the Denver launch, and it seems more interested in laying the groundwork for a transportation subscription service than offering in-app payments for external companies. Lyft’s transit section was made available to all users last September, and transit/scooter options are clearly visible on the home screen before you enter a destination.

Both rideshare competitors see the value in having one central app instead of several, folding in their scooters and bikes, and Uber even dropped in its food delivery infrastructure. This imagined future would have us all pick one company for all of our transportation needs. As long as there are at least two companies doing this, it couldn’t possibly have disastrous consequences for fares or public transit adoption, right?