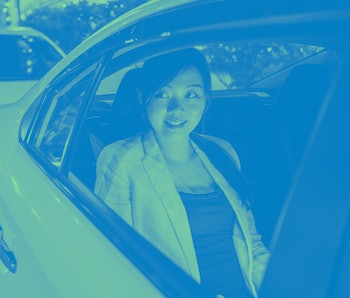 Uber said today that 100 percent of the cars in its network will be electric by 2030 in the U.S., Canada, and Europe, and by 2040 for the rest of the world. Because its drivers are contractors, the company cannot force them to ditch their gas cars — instead it hopes to incentivize them with higher fares for EV rides.

Specifically, the "Uber Green" surcharge will give riders the option to pay $1 extra to request a hybrid or fully-electric vehicle. Drivers who use a hybrid car will earn 50 cents extra per ride, while those with fully-electric cars will receive $1.50 extra per ride. Uber is putting up $800 million of its own money to help fund the initiative, which includes working with car manufacturers to provide attractive offers on electric cars to its drivers.

Ridesharing's environmental cost — The new pledge is important for Uber because ridesharing has been found to increase emissions in contradiction to previous claims that the services are good for the environment.

Most riders use the private options, not shared UberPool or Lyft Line rides, and research indicates that ridesharing actually replaces public transit rides for many people who start using it. Trains and buses are much more efficient because they ferry many more passengers, and the fleets have transitioned to electric much faster than private passenger vehicles have. Private cars also cause increased congestion, which led New York City to impose a ridesharing surcharge in Manhattan.

Uber expects that the higher fares and deals with automakers will be enough to entice most drivers to swap out their cars, but even after 2030 they'll still be allowed to use a regular combustion engine vehicle.

Offloading costs to the driver — In practice, while the move looks to support a good moral imperative, it seems likely to harm the poor and working-class drivers who power Uber's business. Ridesharing companies offload their biggest cost, the car itself, to drivers, who aren't even compensated for gas or wear-and-tear on the vehicles. Even though Uber denies it, many of its drivers rely on it for much of their income to survive.

If the company were to actually compensate its drivers well they might be able to afford a new electric car — but the whole business model is based around treating drivers like full-time employees, without the benefits or wages of a full-time worker. People who can afford to sell their car and get an electric one aren't likely the same people driving for Uber full-time and making its service work. Unless Uber raises fares considerably or makes its drivers real employees — something it might have to do if California has its way.

Right now, the average wage for an Uber driver is between $8-11 per hour after expenses. It's no surprise that the churn of drivers leaving the service is so high. They leave as soon as they can find any other job because, it turns out, that driving people around is a hard job that deserves commensurate pay.

Considering that Uber's goal here is ten years out, though, the company gets some positive press today and pretty soon we'll all forget about the pledge anyway.