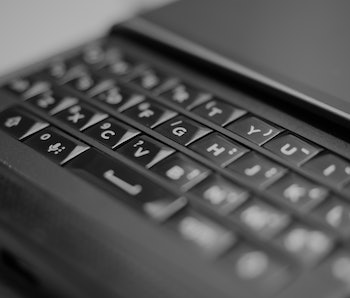 Long live the cellphone keyboard. Once synonmous with the word smartphone, BlackBerry devices and their iconic QWERTY keyboards quickly became extinct as soon as the iPhone and Android phones came out.

In 2020, TCL, who unwisely licensed out the BlackBerry branding to slap onto Android phones called it quits on keyboard phones. Earlier this year, BlackBerry services were turned off for all BBs for good. But the keyboard phone dream lives on. OnwardMobility seemed ready to carry on the BlackBerry’s legacy, but in February it said it’d be shutting down and no longer working on a new phone.

But the keyboard phone dream refuses to be extinguished. Unihertz has announced the Titan Slim, a phone with an eerie resemblance to TCL’s BlackBerry Key2 — keyboard and all. Will anyone bite, though? Does anyone really want a physical keyboard on phone or should we just let this fade away for good?

Teased on Twitter — Unihertz’s first teaser on Twitter shows a sliver of a smartphone’s physical keyboard, only saying that something is coming soon. But those with basic editing skills have been able to produce a clear look at the Titan Slim, even offering an educated guess on the size.

Cranking up the brightness on the teaser pic, we can see the Titan Slim in full view:

Even though the tweet doesn’t reveal any info, Unihertz’ website offers a complete shot of the phone on the landing page, revealing the Titan Slim name and that it’ll be coming soon on Kickstarter.

Unihertz has a history of releasing their projects on Kickstarter, like its Titan Pocket smartphone that also offered a physical keyboard in a smaller form factor. More recently, Unihertz released a super rugged smartphone with a watch face on its back called TickTock.

Buttons please — Unihertz didn’t say when exactly the Kickstarter campaign for its Titan Slim smartphone would start. Since it’s a Kickstarter, there is more risk involved, but it seems like Unihertz has a good track record with its previous releases.

And it is nice to see a smartphone that reminds us of those days when BlackBerry was the phone to have. Even though we’re all on touchscreens now, a lot of us did grow up using BlackBerrys and the forever cool T-Mobile Sidekick. So if you’re desperate to feel the sensation of tactile buttons again, the Titan Slim might be your only way to get that fix.

We don’t even know if the Titan Slim will run Android or not. It probably will, but there’s no confirmation yet.