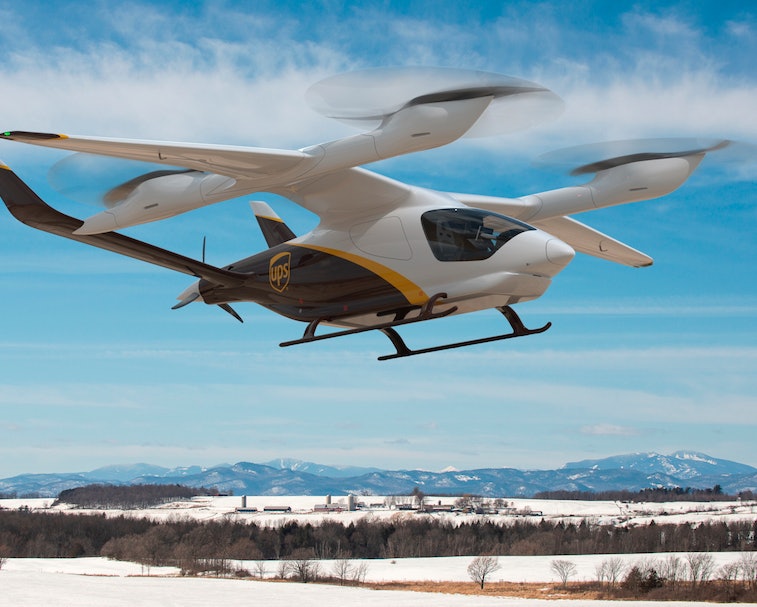 The United Parcel Service (UPS) has entered an agreement with the Vermont-based startup BETA Technologies, which will deliver ten of its Alia-250 electric vertical takeoff and landing (eVTOL) aircraft to the logistics agency in 2024. BETA announced the move is in line with UPS' efforts to reduce the emissions of its operations.

In the same announcement, UPS chief information and engineering officer Juan Perez said, "This is all about innovation with a focus on returns for our business, our customers, and the environment. These new aircraft will create operational efficiencies in our business, open possibilities for new services, and serve as a foundation for future solutions to reduce the emissions profile of our air and ground operation."

Like a drone, but for cargo — The Alia aircraft by BETA works both like a drone or other quadcopter. The aircraft comes with four fixed, vertical propellers which allow the craft to propel itself straight up into the air. It then has one “pusher” propeller. The combination allows the Alia aircraft to take off and land vertically like a helicopter, while the pusher helps it navigate the skies like a plane. In addition to the aircraft, BETA also plans to provide UPS landing pads for the machines, alongside the rechargeable batteries required to power them.

Curbing emissions — BETA's Alia aircraft is able to transfer cargo loads up to 1,400 pounds. It can fly up to 250 miles on a charge, and a full charge takes an hour. It can fly at speed of up to 170 mph. UPS has the option to purchase 150 of these eVTOLs but has decided to stick to 10 for now, with possible plans to expand its vertical aerial operations if its initial service proves successful.

As CNBC reports, UPS Technology Group's vice president Bala Ganesh said that the eVTOL will be used primarily for time-sensitive deliveries in dense cities like New York. The company plans to start offering services in 2024. Ganesh told CNBC that the eVTOLs have an edge over small planes due to their ability to move shipping containers. That standardization could make them extremely popular while keeping operational costs down.

There are, of course, some bureaucratic wrinkles to iron out. BETA needs to receive certification from the Federal Aviation Administration for takeoff, for a start. But assuming that gets settled, UPS might be able to reduce its costs alongside emissions while also making its aerial shipping network something regular consumers, not just importers, exporters, and cargo ship captains know about.