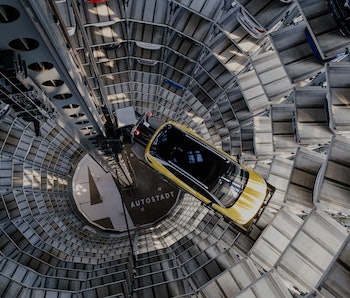 Volkswagen is signaling its commitment to electrification by... changing the name of its American brand to “Voltswagen.” The German automaker confirmed the rebrand of its U.S. to The Verge after mistakenly publishing a press release about the planned name-change earlier than it intended to.

UPDATE (Tuesday, 4:30 p.m. ET): Reuters reports VW now says it was, in fact, joking when it said it planned to change its U.S. operation’s name to “Voltswagen.” The stunt was designed to raise interest in its efforts to electrify its offerings. It’s succeeded in raising eyebrows, and hackles.

The timing of the prematurely released news, which was first spotted by CNBC, made many think it was a joke intended to be published this Thursday, April 1. The editor-in-chief of Jalopnik was so skeptical he said he’d get a VW tattoo if the rebrand was legit. Hopefully, he’s a man of his word now that we know this is no joke. [Ed’s note: except, it is. Sigh.]

To be clear, the company only appears to be taking on the Voltswagen name in the United States, and it will only apply to the Volkswagen brand of vehicles. Americans often pronounce the name with a hard ‘T’ anyway, so maybe that makes sense. The larger Volkswagen Group — parent company to Audi, Porsche, and others — will not rebrand itself. The name change will be official as of May 2021.

It’s a trend — Another automaker, General Motors, recently affirmed its commitment to electrification when it unveiled a new logo meant to look reminiscent of an electric plug. Car companies just can’t seem to help themselves with the dad jokes.

Rebrands are often symbolic, something cooked up by marketing folks to make a brand feel fresh and get consumers talking about it. But Volkswagen is serious about ramping up EV production with a goal to produce 1.5 million electric cars by 2025. It has already found success in Europe with its ID.3 and Audi e-tron cars, where it is the most popular manufacturer of battery-electric vehicles.

Volkswagen CEO Herbert Diess used his company’s success to take a shot at Tesla CEO Elon Musk in his first post on Twitter back in January. As more major automotive giants begin pumping out EVs, it may not be long before Tesla loses its spot as the largest global manufacturer of electric cars.

U.S. push — The United States has lagged behind Europe and China in electric vehicle sales, but automakers are starting to renew their efforts to sell battery-powered cars stateside as they become more popular. Plus, the Biden administration has signaled interest in supporting the shift away from combustion. Deliveries recently began for Volkswagen’s first mass-market electric car in the United States, the ID.4 SUV, which has a starting price of $40,000.

“More than a name change, “Voltswagen” is a public declaration of the company’s future-forward investment in e-mobility,” reads a press release. “By definition, Volts are the derived units for electric potential between two points. The new name and branding symbolize the highly-charged forward momentum Voltswagen has put in motion, pursuing a goal of moving all people point-to-point with EVs.”

Volkswagen has a long history of mass-producing high-quality vehicles, but electrification requires new competencies and the development of entirely new vehicle platforms. It’s not as simple as taking an existing vehicle design and swapping the gas tank for a battery, and there will be hiccups as the automotive companies perfect new battery technology. The ID.4 is Volkswagen’s first EV built on its new Modular Electric Drive Toolkit (MEB). The car features a 77 kWh battery pack and 201 horsepower with an estimated range of 250 miles.