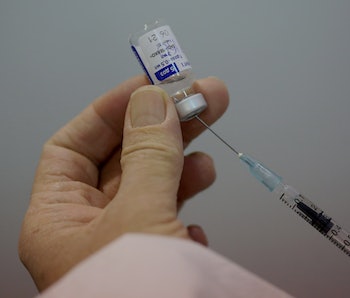 The vaccine rollout process is proving messy, with those first in line to be vaccinated — the elderly — having to navigate janky websites. In New York City, the problem is compounded by there being too many registration portals and no easy way to tell which one to use. Rising to the occasion, a group of volunteers created NYC Vaccine List which pulls appointment slots from approximately 46 locations, according to The New York Post.

It’s no surprise that the vaccine rollout so far has been a messy process. With the Biden administration trying to course-correct, or rather set a course at all following the Trump administration’s lack of a plan. This was compounded when Trump effectively checked out of the business of tackling the pandemic after the election in November. But progress is being made.

We’ll do it ourselves — New York City’s existing vaccine portal just takes people down a rabbit hole of websites, and there are additional city and state websites to sift through, too. So it's no wonder people are having a difficult time getting appointments. And the same problems are being reported in other parts of the country, because there hasn't been a coordinated federal response, leaving states to wing it themselves.

One of the developers, Dan Benamy, got the idea for the site after struggling to get his grandparents vaccinated. He quickly assembled a team of developers, designers, and other volunteers who were also eager to tackle the problem.

NYC Vaccine List launched on January 13 and automatically pulls available appointment slots from vaccination sites throughout the city as well as in neighboring Long Island and Westchester County. This takes the guesswork out of going to each website to find a slot.

“It’s outrageous that it took volunteers to do this and government, at any level, hasn’t stepped in with its resources,” Councilman and Health Committee chair Mark Levine told The NYP. “But it does prove we can build something better for the public that can simplify what is a very chaotic process for scheduling right now.”

The highs and lows of crowdsourcing — NYC Vaccine List has generally been met with fanfare, but privatizing vaccine rollout infrastructure hasn’t always worked out. Philadelphia is still smarting after a corrupt startup all but abandoned Black locals, who are disproportionately affected by the pandemic.

Luckily, bad news seems to be tied to those seeking financial gain. Another volunteer, a Chik-fil-A manager, famously helped save a drive-thru vaccination site about a week ago. With this kind of targeted assistance, hopefully, the only thing we’ll have to worry about in the future is whether we can get a vaccine on a Sunday.