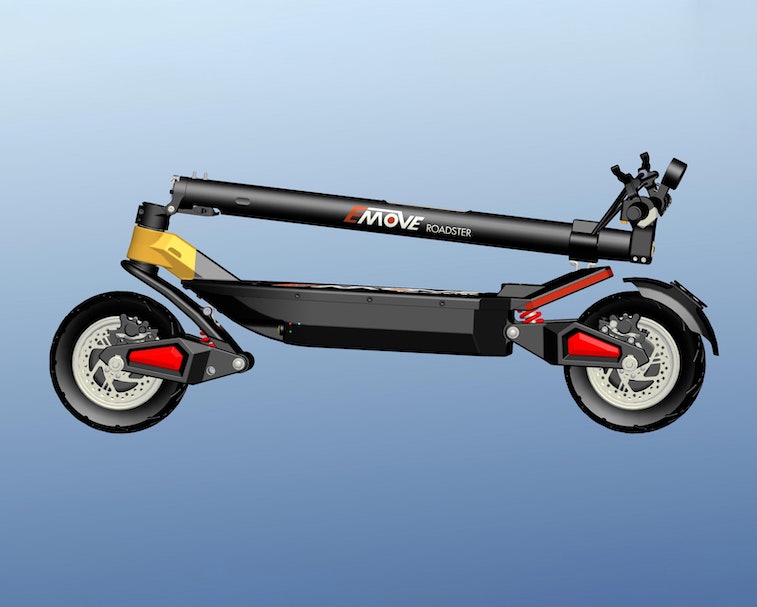 Voro Motors, a California-based purveyor of electric scooters, is about to drop a long-range scooter called the Emove Roadster with an insane top speed of 50 mph. The company already sells the popular Emove Cruiser, with a top speed of 25 mph and 62 miles of range.

Be careful — We should probably say here that 50 mph is pretty insane, and you should definitely have ample protective gear on when riding at those speeds. People already hurt themselves often enough on electric scooters that top out at 15 mph. Nonetheless... it sure sounds exciting. Doubly so thanks to the front and rear suspension, which should make those speeds not break your back when you hit a bit of uneven sidewalk or a pothole.

Images on the pre-order page for the Roadster shows LED lights on the swingarms so people will see you at night. The jumbo, 1.6 kWh battery — which Electrek reports should give the Roadster a similar range to the Cruiser — is stored in a carbon fiber enclosure, and the scooter uses hydraulic disc brakes, which should help with slowing down quickly. And then there's the aforementioned double suspension setup, which we're especially excited to try. Because suspension on e-scooters is a game-changer, and even more effective than bigger wheel diameters.

Coffin not included — If you're going to ride this thing at its top speed, you should be very careful, and do so on the street — not a sidewalk. You can kill yourself if you want to, but don't risk killing someone else.

There's no word on pricing or when exactly it'll be available, but the Cruiser is expected to cost around $1,400. That's a premium over the likes of Unagi's $1,000 scooters, but still not the most expensive in the market. But Voro Motors has already proven itself capable of releasing impressive electric scooters, so this isn't vaporware. You might want to make sure you have a coffin picked out before you purchase the Roadster, however.

There's a reservation list on Voro's site where you can express your interest in buying one, and sign up for updates. The best part? There's no deposit is required. But as Voro Motors explains, bear in mind that, "Signing up does not guarantee you a unit, but it puts you ahead of others who don't."