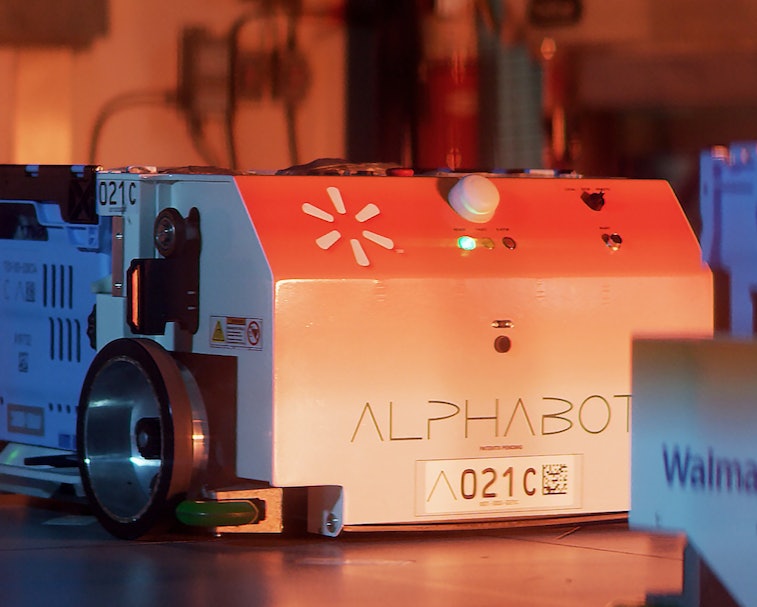 A Walmart superstore in Salem, New Hampshire is crawling with robots as the staging ground for the company’s next offensive in the online grocery wars. Developed by the startup Alert Innovation, Alphabot is a system that uses autonomous carts to pick up items and deliver them to a still-employed, living-breathing person who bags the orders and delivers.

Take that, Amazon — The system has been operational at the 20,000 square-foot space since last summer, and it’ll enable Walmart to prepare online pickup and delivery orders quicker. If/when Alphabot is rolled out further, it’ll help the retail giant as it competes with Amazon in the grocery space.

Sure, choosing between Walmart and Amazon is kind of like picking between your high school bully and your office nemesis, but at least Alphabots don’t have to pee in bottles or wear down their bodies to get you your groceries quicker. Humans will still retrieve produce and other items alongside Alphabot, because you don’t want a robot bruising your delicate banana.

Expansion — For now, Alphabot will continue to be “studied, refined, and perfected” in its Salem base. A broader rollout could eventually stem from there, but for now Walmart has a cool new toy to show off to the world.