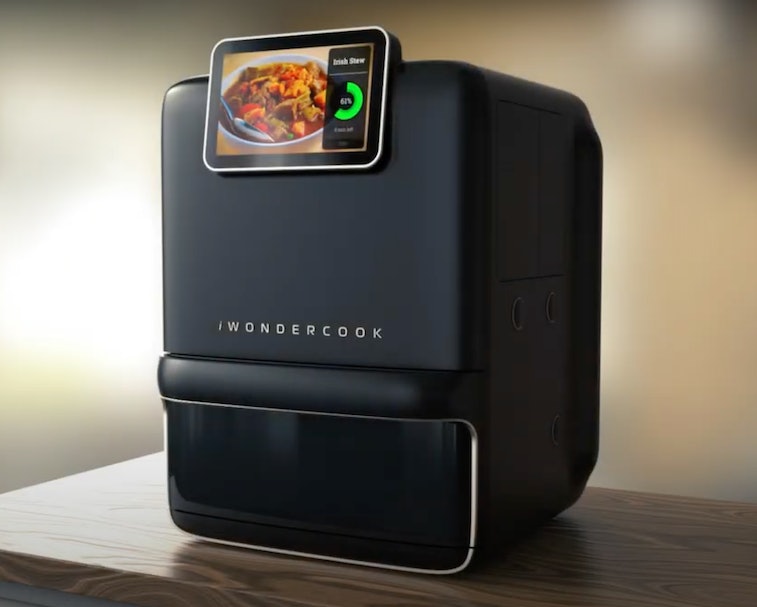 CES doesn’t feel nearly as chaotic as it usually does in its first completely virtual year. Without that convention floor wanderlust, however, smaller innovators can easily go unnoticed. The iWonderCook robotic chef has braved CES before, but we might all be tired enough of cooking to finally take it seriously. The small appliance makes one-pot dishes using meal kits as cartridges, finding the space in the market between a Blue Apron and a Lean Cuisine.

Set it and forget it — The iWonderCook really wants you to take a load off. You can order meals from its touchscreen or online that will last up to 14 days in the refrigerator. The company discourages putting them in the freezer and champions organic, fresh ingredients. There's even a commercial version, which is perfect for offices in food deserts. "Single portion" meals for one to two are priced from $8 to $13, while "family-size portions" for three to four people range between $16 and $26. Users can, of course, specify any dietary requirements.

When you’re ready to eat, just pop in the food cartridge and place the pot in the bottom. The machine will appropriately adjust the temperature, add ingredients and spices at the right time, and stir everything around to create a cooked meal in as little as 15 minutes. There’s also a special compartment for oil that should last for several dishes.

A disposable filter soaks up grease and any food splatters, and the pot is dishwasher safe. Considering how often we’ve all been doing dishes for nearly a year now, that kind of cleanup sounds pretty sweet.

The automation of cooking — We keep struggling to bring automation into how we cook. We’re starting to get more smart ovens, thanks in large part to the fervor around the June Oven, and there are new meal kit services popping up all the time. So why are we so resistant to having these ideas meet in the middle, maybe even surpassing our expectations?

Cooking is personal and taste is subjective, so you can see why people might not want an extra cook in the kitchen that thinks it’s smarter than them. But after a long day, a robochef could be a godsend, especially for those lacking in culinary prowess. Instead of reaching for a creature comfort like fast food — a sector that is embracing robot chefs of its own — imagine a future where you have your own robot that makes healthy meals.