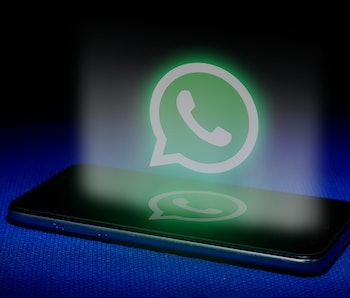 WhatsApp may soon let you sign in to your account from multiple devices simultaneously. Currently, the messaging service only lets you be signed in on one device. The potential change was spotted in a beta version of WhatsApp for Android reviewed by WABetaInfo.

WhatsApp has a strict policy that clearly states switching your account between different devices too often can lead to your account being blocked altogether. Furthermore, after you sign into your account on a new device, any previous devices that were already signed in get kicked out. This is because as a security measure WhatsApp uses a device's phone and IMEI numbers as the keys necessary to decrypt chat logs. When you change the device associated with your account, the keys change and you can't unlock old messages.

Maybe signs of something bigger? — If WhatsApp does push ahead with this change, it suggests that the company might change the authentication system to something like two-factor security keys. It currently encrypts all messages and stores them locally on the phone, but WABetaInfo found in the beta that adding a new device to your WhatsApp account will now trigger a message informing your contacts that you've added multiple devices to your account, suggesting a chat will sync to multiple devices.

The changes are potentially related to parent company Facebook's plan to integrate its suite of messaging apps. The company says integration will allow users of one app, like WhatsApp, to message users on Facebook Messenger or Instagram, and all messages will remain encrypted. WhatsApp's back-end plumbing will need to change to allow messages to be stored on a server so they can be retrieved by Messenger and Instagram users whose chat logs aren't stored locally but sit in the cloud and can be accessed from multiple devices.