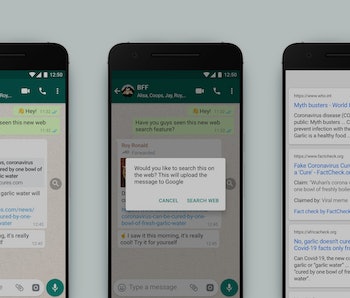 WhatsApp has come up with a new way to evaluate the validity of articles shared widely on the messaging app. Now when you receive an article in a message that's been shared between many people, WhatsApp will provide a quick way to search for the article on Google.

Even though WhatsApp is a messaging app, group chats allow people to talk with large groups of individuals — oftentimes people you don't even really know. Messages containing links to articles can be forwarded between groups and individuals very quickly, meaning sensationalist articles can spread virally on the messaging platform just like they would elsewhere. If they're coming from a loved one you're even more predisposed to trust them.

WhatsApp has largely skirted discussions of misinformation because it's inherently a private platform by nature. But a string of violence in India connected to fake news on the platform back in 2018 brought WhatApp's issues to light.

Paste to Google — WhatsApp has worked to combat the spread of fake news by limiting how many times a message can be forwarded, and it indicates when a message you've received is coming from someone you're not in close contact with. Now, a magnifying glass will display beside any article you've received in a message that's been forwarded to many people. Clicking on the magnifying glass will paste the title of the article into a Google search so you can see more information about it, such as articles from credible sources debunking it.

Fact-checking private messages — It's arguably a more "unbiased" implementation than what happens on Facebook proper, where the company manually decides what content to fact-check and label. Here, WhatsApp just places the search option against any article that's been shared widely. It's more of a "search for this on the internet" button rather than a "fake news spotter."

Then again, conservations like to say that Google is biased, so they still can't really win. WhatsApp is end-to-end encrypted and can't read messages, so that also explains why the app isn't making any editorial choices here.