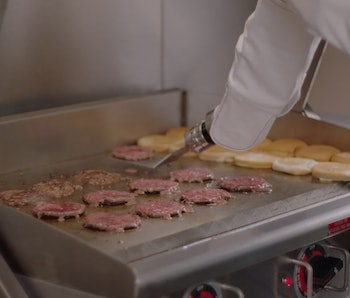 After a pilot program, White Castle is convinced that robots are the future of its business. The chain will add Flippy robots to up to 10 more locations in 2021, according to Restaurant Business. After testing one of the machines from Miso Robotics in Indiana, the company is ordering more robots to allow human workers to focus on their more interaction-based skills like customer service.

The robots are here to stay — The Flippy test robot made 14,580 lbs. of food, over 9,720 baskets, since late September, according to a statement from White Castle. The efficient robot is the space-saving rail version, and it frees workers up to hone their softer skills while helping the chain enforce social distancing. When flipping burgers and frying potatoes, the robots are also clocking supply and demand to better inform purchase decisions.

Robots have become more valuable during the pandemic, from healthcare to food service applications, but they’ve had their lasers set on the latter industry for years. Flippy started making a splash a couple of years ago while chains like Domino’s and McDonald’s are leaning into voice-activated ordering tools as well as robot fryers.

Buck Jordan, president and chairman of Miso Robotics, told Restaurant Business: “For [White Castle], it’s really the better use of staff. They’re focused on getting as much out of the labor as possible. They’re not letting anyone go because of Flippy.” Jordan went on to say the company is in talks with many players in the industry. Though White Castle might value its employees (for now), other companies could start to shift towards automation — a regular concern of pro-union McDonald’s employees.

So far, the Flippy in Indiana has proven the most helpful during the night shift, supplementing the human workforce through the dinner rush, increased delivery orders, and of course, all of the Harold and Kumars in the area. In a post-pandemic world, however, reliance on food delivery will likely wane, pitting employees against machines.