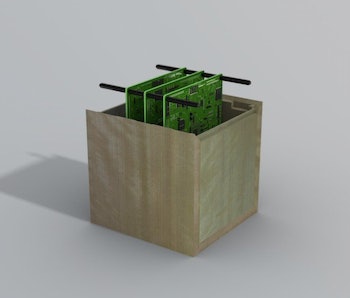 We’re shooting more satellites into Earth's orbit than ever before, and that comes with a major side effect: space debris. Japanese researchers from Kyoto University are working on a solution to this problem that involves using wood materials for satellite construction rather than traditional metal materials.

The team is collaborating with Sumitomo Forestry, a Japanese logging company, on the project. They hope to have a working prototype of a wooden satellite ready by 2023.

But first, the collaborators have a behemoth task in front of them: figure out which wood materials will actually work for flying around in space. Metals have always been used for space exploration because they’re reliable and hardy — wood is entirely new territory.

Too much metal — Space junk isn’t a new problem, but it’s garnered more attention in recent years now that private companies like SpaceX are flinging satellites into space with reckless abandon. We’ve all but perfected the art of sending satellites into space, but re-entry comes with risks. Instead of destroying decommissioned satellites by getting them to re-enter the atmosphere where they can burn up, they're most often left in orbit. That means ever more potentially damaging items that could damage the International Space Station or other objects in orbit.

Even those that are destroyed come with their own problems. Takao Doi, a professor at Kyoto University, says the researchers’ concern is that metal satellites re-entering the atmosphere burn and create tiny alumina particles that stay in the atmosphere for many years. Those floating particles are likely to add up quickly — and that build-up could even affect the Earth’s environment.

Doi is not alone in this concern. Plenty of space-focused organizations have spoken up about the issue — but there still aren’t any international space laws about cleaning up this debris. It’s left up to private organizations to clean up the mess.

The most secret of woods — These researchers have a long road ahead of them. Before any satellites can be built, Sumitomo Forestry will need to develop wooden materials that are extremely resistant to sunlight and temperature changes.

The exact type of wood is being kept under wraps. This isn’t just some tree that’s been cut down and whittled into the shape of a satellite — it’ll need to protect the expensive machinery and survive a launch into space.

There are about 6,000 satellites in orbit right now — that number is expected to more than double in the next few years. Internet satellite programs alone will launch thousands of satellites this decade. By 2030, Amazon hopes to have more than 3,000 satellites of its own in Earth’s orbit. Making at least some of them out of less harmful and easier to destroy materials can only be good for humanity's longer-term space ambitions.

More like this
Jackson Chen
Sep. 17, 2022
Tech
Zero’s long-range e-motorcycle is a beast on and off the road
Jackson Chen
Sep. 14, 2022
Tech
GoPro goes small and screenless for its Hero11 Black Mini
Ian Carlos Campbell
Sep. 11, 2022
I've Been Expecting You
Bang & Olufson's new soundbar is a perfect fit for your supervillain lair