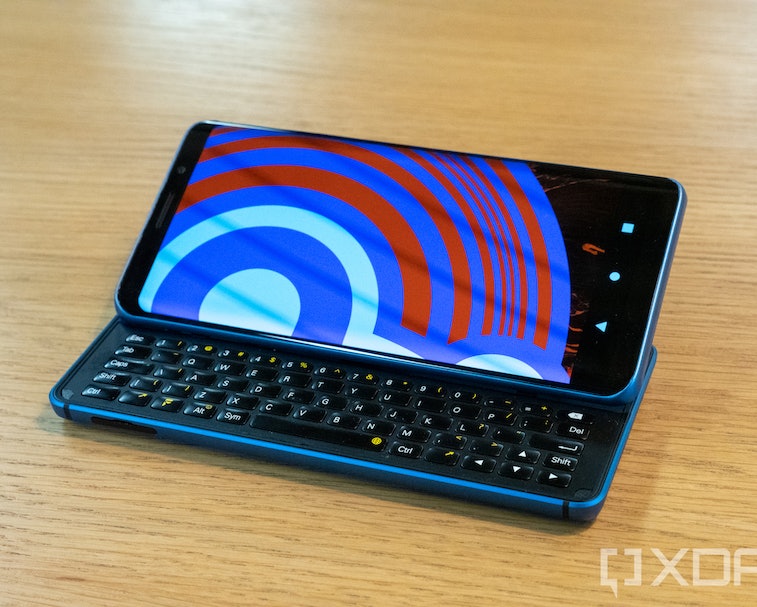 The smartphone ecosystem has settled into a comfortable duopoly of Apple and Google. The former is known for offering iOS users strong privacy but less freedom of choice and fewer devices at higher price points, while Google's Android offers a bit more choice and a far wider selection of devices... but is also more permissive of data collection. There isn't a solid phone out there for those who want both strong privacy and total control over their device's operation, so Android news and community site XDA Developers made one of its own.

Total freedom — Called the Pro1-X, the smartphone out of the box runs the open-source Lineage OS, a flavor of Android that promises enhanced customization and privacy options. But the phone can run other operating systems, too — for Linux fans, the Pro1-X is also the first high-spec smartphone to support Ubuntu Touch OS. And maybe best of all, it has a slide-out physical keyboard. Not the sort you'd find on a BlackBerry, mind you, but the sort you used to find on a Nokia 9000 Communicator.

Even though the underlying Android OS is open-source and customizable by its nature, over the years the project has increasingly splintered off from the licensed version that Google distributes and continues to effectively lockdown thanks to ever more dependence on its suite of apps. The commercial version of Android also receives regular updates from Google. Add that to Google's proprietary apps and it's difficult to replace it with alternative versions of Android (just ask Huawei). The purpose of the Pro1-X is to give people a level of freedom not offered anywhere else.

Good hardware — Other similar projects that seek to offer an independent alternative free from the influence of Apple and Google exist, but the phones tend to be low on specs and quality. That's really where the Pro1-X stands out from the rest.

There's a lot to like here — the Pro1-X is based on the existing F(x)tec Pro 1, a smartphone made by London-based F(x)tec. The phone is geared towards keyboard enthusiasts with its physical QWERTY keyboard that slides out from the back. It features an older Snapdragon 835 processor, but XDA customized its versions by upgrading the RAM and storage from 6GB and 128GB to 8GB and 256GB respectively. On top of that, the Pro1-X is packing an FM radio, SD card slot (!), NFC, fingerprint sensor, HDMI-out, and dual stereo speakers. The display is a 5.9-inch FHD AMOLED with curved edges — and there's no notch!

Less incentive to sell — The Pro1-X is a cool phone for those who don't like the proprietary nature of iOS and Android. Both of those companies in theory support user choice — and claim privacy credentials — but ultimately they have inescapable profit motives that dictate their decisions. When the incentives are gone, a totally open OS can offer unparalleled freedom — like access to the command line where users can directly give commands to their phones to run. Because Lineage OS and Ubuntu Touch are completely open source, there's no corporate overlord embedded in the phone and encouraging you to use apps where it can siphon off data.

At least, that's the pitch. Whatever the motives behind it, the Pro1-X really is an interesting choice in today's world where privacy has become a greater concern and the public has few options to choose from. And it's a return to roots for the computing world that wasn't always so influenced by capitalism, or as tethered to its masters.

The Pro1-X is available for purchase through Indiegogo for a limited time, after which it's gone for good. It's priced at $899, though XDA is selling the first 100 units for $639 at this link. And yes, the Pro1-X does include a charger in the box.