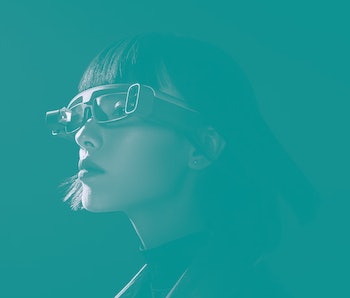 While Meta and Snapchat push towards making AR glasses as inconspicuous as possible, Xiaomi is running in the other direction. The company just announced its AR glasses, called the Mijia Glasses Camera, that feature a rather bulky design. It’s reminiscent of Google Glass, but with chunkier arms and a camera housing that sticks out.

Xiaomi first teased its concept for smart glasses back in 2021, but the previous design was sleeker. Instead of building off a minimalist design, however, the company appears to be trending toward this more in-your-face look.

Xiaomi may be known for its smartphones, but the company has also dabbled in a variety of unconventional products, like walkie talkies, Lamborghini go-karts, and even cyberdogs. When you consider all that, it’s not too farfetched for Xiaomi to want to make AR glasses.

Solid specs — The Mijia AR glasses’ chunky design may be the result of its decent specs. It’s built with a Qualcomm Snapdragon eight-core chipset, has 3GB of RAM, and 32GB of storage. The displays have a peak brightness of 3,000 nits and a pixel density of 3,281 pixels-per-inch.

As for the camera module, you get a 50-megapixel main sensor and an eight-megapixel telephoto lens, along with 5x optical zoom and 15x hybrid zoom capabilities. The Mijia AR glasses will also be able to record video for up to 100 minutes. Xiaomi is trying to get its AR glasses to stand out with some AI functionality, including a feature that lets you translate text between English and Chinese in real time. The Mijia also has a “backtracking” function that can save videos within 10 seconds before even pressing the shutter button.

The Mijia AR glasses can only last for a little over three hours with its 1,020mAh battery, but that very well could be on purpose. The AR glasses will weigh about 100 grams, which probably makes it feel a bit cumbersome to wear over long periods of time.

Let the people decide — Xiaomi will be going with the crowdfunding route for its AR glasses project. The Mijia AR glasses will initially be priced at CNY 2,499, or around $370, for initial backers on Xiaomi Mall, and later raised to CNY 2,699, or about $400, when it actually hits the Chinese markets.

There’s no word on if Xiaomi is planning to release its AR glasses in the U.S., but the company generally releases its products with Chinese markets first. On the other hand, Xiaomi might feel like there’s too much competition in the the North American AR space, with companies like Google and Meta each making their own AR offerings.