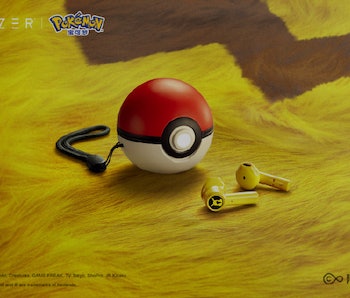 Razer has succeeded in creating a wireless earbud case you actually want to carry around. The beloved gaming lifestyle brand announced a Pokeball that charges Pikachu earbuds on Monday. Zing Gadget reports the dynamic duo will only be sold in China starting April 16.

Pikachu’s stats — The electric yellow earbuds feature a Pickachu silhouette on the back. The silicone earplugs pull double-duty by lessening the likelihood of losing them and providing passive noise cancellation. The earbuds hold a 13 mm driver for above-average, dynamic listening and have a sweatproof rating for your workouts. They also easily pair with Bluetooth 5.0 and smart assistants like Siri.

The earbuds nestle into the Pokeball when they need a re-up. They get three hours of playtime, and the Pokeball can charge them up to five times. The front light on the Pokeball indicates the charge level at a glance while also feeling like Pikachu is about to bust out at any moment. The Pokeball also has some familiar sound effects baked in.

The set complements other Pikachu peripherals Razer announced last October which were also exclusive to China.