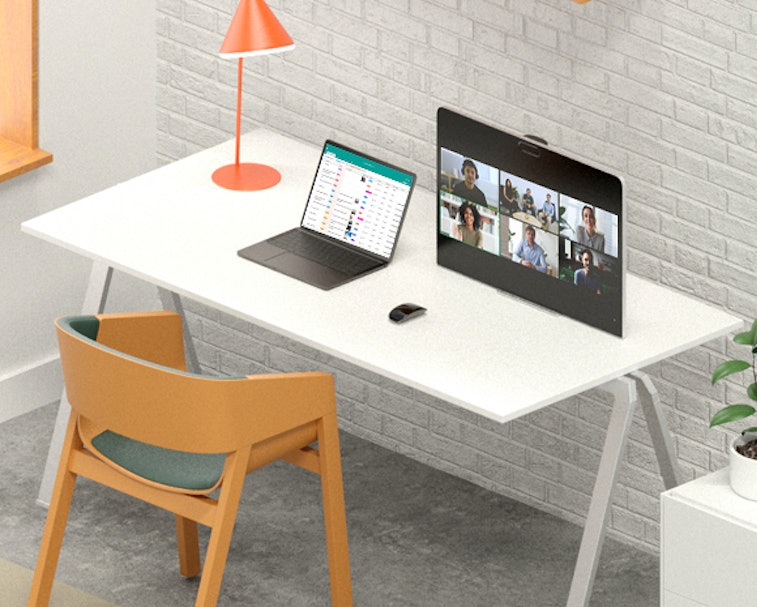 At this point in the COVID-19 pandemic, it’s clear that Zoom is going to be around for a very long time. Despite its many security and privacy scandals, the video-conferencing software has swiftly risen to prominence as the de facto solution for taking meetings from home.

But Zoom isn’t ready to stop growing. The company has now announced its first-ever hardware solution, and — you guessed it — it’s dedicated to video-conferencing.

The new product line, called Zoom For Home, is being produced with the help of a third-party hardware company called DTEN that specializes in communications technologies. The first device, called “Zoom For Home — DTEN ME” (a mouthful, truly), is a $599 touchscreen monitor that comes pre-installed with Zoom’s software solutions.

If you’re thinking this kind of device is vastly unnecessary in 2020, know that you’re not alone. Some work-from-home employees will be attracted to the simplicity promised by the device, though, and its release may be a sign of similar, less-expensive options to come.

That’s a lot of webcams — As far as dedicated hardware solutions go, the DTEN ME looks pretty impressive.

It’s a 27-inch touchscreen display with — get this — three smart webcams and eight noise-reducing microphones built-in. That kind of arsenal does make the price point a little more palatable. At least you’ll be able to move that bulky microphone off your tiny home desk.

Built for Zooming — The DTEN ME isn’t just made with Zoom in mind; it’s entirely built around the video-conferencing software. Though it might be tempting to use that enormous touchscreen for Photoshop, it’s not really built to handle that, sadly.

The DTEN ME is a Zoom machine, pure and simple. Its interface allows quick access to all the Zoom features we’ve become familiar with, like your contacts list, whiteboards, and, of course, the meetings themselves. It can even sync with your calendar to alert you to upcoming meetings, which you can join with a tap.

The device does have a screen-sharing option, too, though what technology is being used for that is a little unclear. TechCrunch reports it as “ultrasonic pairing,” which sounds great, but doesn't tell us much.

You probably don’t need this — The most pressing problem with the DTEN ME is also the most obvious one: we can easily video-conference without paying $599. There’s just no need to pay that kind of money for a device that can only do one thing when the same money could get you a high-end iPad that can run Zoom and any other app in the App store.

Zoom’s popularity is inherently linked to its ease-of-use and low overhead: just download the application and jump into your meeting. You can join a Zoom call from your phone, your laptop, or your tablet.

Stepping into the hardware market is no small feat, but starting with such an expensive device could just be the project's downfall. Still, Zoom says it expects to produce more hardware in the future. Hopefully, those devices are a little less tough on the pockets. Though, of course, if you're able to expense it, who cares what it costs? Perhaps it's those users who aren't footing the bill themselves that Zoom's banking on.