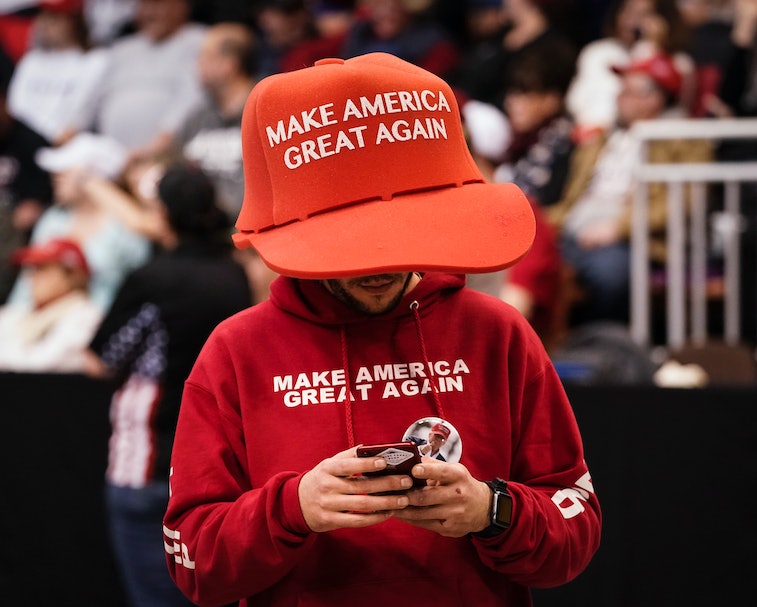 Social media network Parler, which was presented by its creators as a safe space for right-wingers and free speech absolutists angered by Facebook and Twitter occasionally policing hate speech and falsehoods, can't seem to go a week without some sort of scandal befalling it. It's almost as much fun as watching Trump hemorrhage money on frivolous court cases.

The report notes that at least 50 fake accounts have been found falsely presenting themselves as vice president Mike Pence, former Trump campaign attorney Sidney Powell, and others all the while selling "commemorative medallions," Trump caps, coins, and other junk no one in their right mind would spend money on.

How we got here — Fake accounts were able to exploit Parler's verification system, according to the report. If you're on Parler, you can receive a red Parler citizen badge by simply offering your government-issued identification card. BuzzFeed News reported that these users were able to trick others by simply changing their account names after receiving official verification. It's yet another headache for the right-wing-courting platform. About a week ago, Input reported that Parler's reactive moderation policy had flooded the network with pornographic content.

What Parler says — Parler's CEO, John Matze, told BuzzFeed News he believes, "most of those fraudulent accounts were a sad attempt to circumvent our advertising network."

Parler's creator clearly had big dreams for the platform. It was supposed to be a free speech utopia where pesky questions around ethics needn't bother users who wanted to spout conspiracy theories, deploy racial slurs, contest election results, or otherwise show only the most tenuous relationship with veracity or the sort of behavior befitting adults.

If you wanted to dog-whistle about an imaginary race war or scaremonger about matters of immigration and unemployment, Parler was ready to welcome you with open arms. In reality, however, Parler has barely created little to no impression on the social media landscape. There has been no exodus of Twitter right-wingers who magically found a permanent home in Parler, in part at least because being toxic is no fun when everyone agrees with you and there's no one to troll.

Those who bash Twitter secretly know that to remain newsworthy and relevant, they need the likes of Jack Dorsey far more than they need someone like Matze. Prominent Republican senators like Ted Cruz once proudly boasted that they were headed to Parler all the while remaining even more active on Twitter. As a result, Matze's platform is less of a bustling social media network these days and more a dull echo chamber almost as pitiful as the Quibi subreddit. It's almost enough to make you feel bad for Parler. Almost.