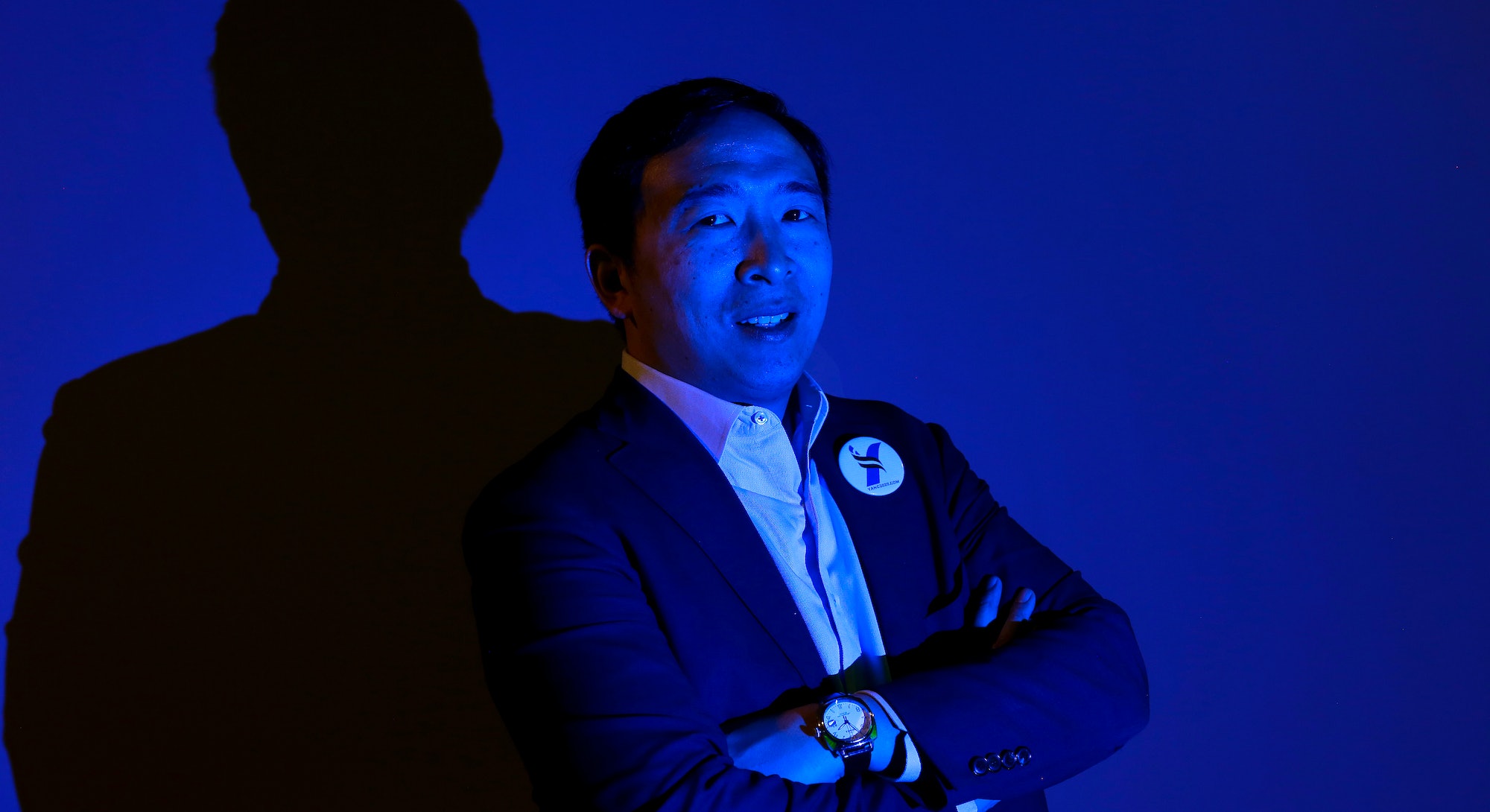 Phillip Lietz, a 35-year-old artist and Brazilian jiu-jitsu practitioner from Denver, has been a fan of former U.S. presidential candidate Andrew Yang ever since catching him on Joe Rogan’s podcast in early 2019.

“I was quite happy when I heard about this politician who was interested in eradicating poverty — considering I’m someone who has never really been in a favorable tax bracket,” Lietz says. He also liked that Yang spoke out in favor of the idea of making police officers train in jiu-jitsu. Lietz became part of Yang’s fandom, aka the Yang Gang.

So Leitz, who trained as a commercial illustrator at Rocky Mountain College of Art and Design, was overjoyed in December when Yang put out an open call for artists to participate in a collaborative NFT project tied to Lobby3, Yang’s DAO (distributed autonomous organization) meant to bring different voices to Washington, D.C.’s lobbying sector. Lobby3 is a “project to fund effective policy advocacy and educate lawmakers about the positive potential of Web3,” according to its website.

“Any time you think you’re a part of a project with a big-deal public figure like that, you can get pretty excited about that opportunity,” Lietz says. The request to collaborate also enticed NFT artist fumeiji, who asked Input not to use his real name. “I did not know anything about the DAO or even what exactly the art would be used for,” he says. “[But] I was looking for work, and it seemed like a good opportunity since I was very new as an artist in Web3.”

Lietz and fumeiji both applied through the Lobby3 website, and both received an emailed response from Yang’s former campaign manager and Lobby3 cofounder Zach Graumann three days after Christmas saying that “we loved your art and would love to explore working with you.”

The artists were asked to help design elements of a collaborative mural, the artwork for which would be broken up into thousands of puzzle pieces, each of which would be minted as an NFT. Members of the Lobby3 community who bought a puzzle piece would be given a token allowing them to participate in voting, events, and “experiences to help bring our voice and needs to DC,” Graumann wrote in an email. Attached to the message was a blank canvas of buildings, which artists were encouraged to enhance with their own work.

Lietz chose a small building that he intended to adorn with a flaming red dragon. But first he had questions, like whether the artists would get paid. “Any artist we select will receive a percentage of our revenue,” Graumann replied in an email. Any artist who did design work but wasn’t selected would receive a flat $250 fee, he added.

Lietz asked for a contract, but was rebuffed. “The guy told me that it wouldn’t really be necessary, because the email chain would hold up in court,” Lietz explains, “and him and Andrew are, quote, ‘men of their word.’”

Normally Lietz would ask for something on paper with a specific percentage, but he says he bought Graumann’s explanation. “When you’re dealing with people who are as well-known in the public eye as someone like a politician, you assume that they’re going to do the right thing.” (Graumann acknowledged a request for comment, but did not get back to Input by the established deadline.)

Lietz completed two designs by a January 4 deadline and heard nothing from Graumann or the Lobby3 team for months. He kept emailing every week or two to see if there were any updates. He watched the group opening up minting of its membership tokens and starting to sell NFTs. Lietz took part in Lobby3’s Twitter Spaces about the project to find out what was going on.

Graumann finally got back to Lietz on March 17, promising updates the following week. On March 24, Lietz received an email from Graumann, offering the artist $500. “Our artist commissions weren’t huge,” Graumann explained, “but would love to send you $500 for your time and effort.”

The amount irked Lietz. He checked Lobby3’s records on OpenSea, which showed nearly $800,000 in token sales. “I saw that $500 was one-tenth of one percent, which was sort of an embarrassing disparity,” he says. “I told him I really was not satisfied with $500 and had a hard time reconciling the disparity between what they made and what I was paid.”

Graumann explained that Lobby3 was “not a typical NFT art project,” with funds going to a nonprofit and a DAO treasury. “The art was used as a fun community engagement tool, but not the driver of sales or token-worth at all. Plus, your art wasn’t used in the NFT itself, just the mural on the website.” (Lietz points out that the mural is on the background of all NFTs Lobby3 mints; his contribution is visible in some of them.)

Graumann also claimed that Lietz’s art was a “last-minute” addition and wasn’t actually going to be used in the project until Graumann essentially took pity on the artist. The money was offered, Graumann wrote, because “you seemed like a great guy and I wanted to throw you some cash and get you some exposure.”

Lietz, who recently went public with his complaints on Twitter, says he felt like Graumann was gaslighting him. “It was like throwing me a bone, which was rude and disrespectful and unnecessary,” he says. He held his tongue, waiting to formulate a response — during which time he got another email from Graumann, saying he had spoken to all the other artists on the project, none of whom were unhappy with their treatment.

“I reached out to three or four of the other artists involved, who all confirmed with me that not only had they not received payment, but they hadn’t even received word back from Zach,” says Lietz.

fumeiji confirmed to Input that he had likewise not heard from Lobby3 until they began offering artists tokens for their work in the last week or so. “Given the scale of the project and that I met a deadline they set in early January, I do wish I’d been paid more,” he says.

“Things felt a little disorganized,” he continues, “and it would have been nice to be kept in the loop more.” He also is concerned about the tone taken by Graumann in the email screenshots shared by Lietz, saying it “looked like gaslighting.”

Lobby3’s attitude doesn’t surprise Catherine Flick, an academic at De Montfort University, U.K., who has studied the issues with NFT projects. “Once again, we see examples of the people doing the work for high-profile and profitable NFT projects — in this case, the artists — being exploited by those who made the profit,” she says. “NFT technology was supposed to hand power back to artists, but we continue to see that the theory has not translated into practice.”

“I’m very much bummed out about the way they’ve handled this whole thing.”

Flick advises artists not to participate in NFT projects without contracts negotiated in advance, and she suggests they review any code for smart contract–allocated revenues. “This makes it quite complex for artists who do not understand the nuances of the technology, but who might have been sold extravagant promises based on hype, putting them at a disadvantage in negotiations,” she says.

Lietz now has a far lower opinion of Yang himself. “I’m very much bummed out about the way they’ve handled this whole thing,” he says. “And it doesn’t necessarily give me a whole lot of hope for what they’re doing in the future.”

Lietz wishes that artists would be paid a standard 50 percent of all revenue gained from NFTs, but knows that’s highly unlikely. “I would be quite satisfied if they merely paid the artists involved one percent,” he says, though he still thinks that would be a step too far for Yang’s organization.

“I don’t know them personally, I don’t know who they are as people, but based on the way Zach has already responded to me,” Lietz says, “I don’t necessarily have high hopes for that being able to happen.”