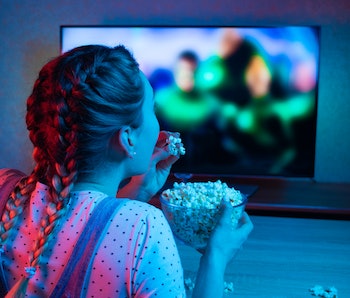 Apple is reportedly buying the rights to air a backlog of older movies and shows on its TV+ streaming service. The company has struggled to juice adoption of the service since launch in November, even as Netflix and others see huge boosts due to global stay-at-home orders leaving more people looking for things to do.

Apple hasn't disclosed any hard numbers for TV+, but the Bloomberg report says that it had only signed up 10 million people as of February — and of those, only half are actively using TV+. That's even though customers who purchase a new iOS device get the service free for one year.

Disney's competing service, Disney+, launched around the same time as TV+ in November of last year and managed to hit 10 million subscribers in one day.

TV+ entered the ring with a small library of original content that hasn't yet grown much. Of the shows it did launch with, "The Morning Show" is probably the most notable with two Golden Globes nominations. None of Apple's original content has really broken into the pop culture lexicon, however. Instead the public is talking about Netflix's "Tiger King" and the direct-to-consumer release of Dreamworks' "Trolls World Tour."

Old buffering new — Contrast TV+ with Netflix. Over the years that service has benefited from a huge backlog of licensed content, from "Friends" to "The Office." Netflix has been simultaneously pouring billions into its own original content as the providers of those hit shows launch their own streaming services and pull the content off Netflix, though companies including NBC and Fox are still licensing their content — for the right price.

Disney+, meanwhile, already has its own massive library of classics to lean on as it develops new originals like "The Mandalorian."

TV+ has neither a large library of old content or original productions. It probably doesn't help either that filming has been halted all over the world, meaning Apple will be delayed in releasing new content of its own.

Services are Apple's future — Fortunately, the company has the cash and time to bulk up its service. Its Apple Music service was panned at launch as playing catch-up to Spotify but now has more than 68 million paid subscribers, a trajectory that has made it a fierce competitor to the Swedish incumbent.

And in Apple's defense, developing good TV entertainment is hard. Netflix is lauded for nabbing hits like "The Last Dance" but nobody remembers its first original, "Lilyhammer."

Apple considers services including Music and TV+ to be a big part of its business going forward as sales of new iPhones hit their limits. More than 23 percent of Apple's revenue now comes from services, or $13.3 billion in the last quarter. If the company can find success in TV+ that it's found in Music, the sky's the limit.