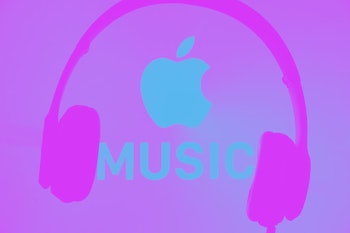 Apple announced its latest foray into entertainment streaming today with Apple Music TV, a free, 24-hour channel offering "exclusive new music videos and premieres, special curated music video blocks, and live shows and events as well as chart countdowns and guests." The new service is available immediately (for U.S. residents only, mind you) on its own site, as well as via both Apple Music and the Apple TV app.

The channel started things off this morning with a countdown of the top 100 songs currently streaming on Apple Music, and already has a number of events and shows scheduled in the upcoming days and weeks. On August 22, there will be a Bruce Springsteen takeover of Apple Music TV to celebrate the release of his new album, Letter to You, featuring his past music videos, an interview with Zane Lowe, and "a special livestream fan event." Following that, new videos from Joji and Saint Jhn will debut this Friday at noon EST, while Apple promises new premieres every Friday going forward.

A direct competitor to YouTube and Vevo — Wading into the crowded music video streaming field alongside companies like YouTube and Vevo has been a long time coming for Apple since the media giant first debuted its Music service back in 2015. Since then, Tim Cook's empire has sunk (comparatively) large amounts of cash into the endeavor, like the upcoming Billie Eilish concert documentary, The World's a Little Blurry, which is set to premiere in February 2021. Presumably, Apple Music TV will be the venue for this, although apart from the few explicit announcements like Springsteen's, Apple has provided little else in terms of what to expect for its new venture. Of course, we're sure there'll be a lot of new releases and exclusives coming to the channel very soon.

While essentially sounding a lot like an "iMTV," it's nice to see at least something reasonably priced (read: free) from Apple right now, given the price tags on pretty much everything else it's offering right now, not to mention the hefty "Mafia-like" cuts the company still insists on taking from anyone hoping to offer something through the App Store.

It's difficult to see how Apple Music TV will truly be able to differentiate itself from the well-established competitors, but if any company can do it, it's probably Apple.