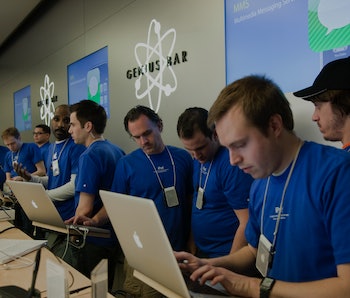 Apple has reportedly begun working with anti-union firm Littler Mendelson to plan diversionary tactics in response to two budding unions at the company, one of which employees filed for early last week. For those keeping track at home, that’s the same legal group Starbucks hired to deal with its own employee-organizing annoyances.

To be clear, Apple hasn’t actually said anything publicly about the idea of Apple Stores unionizing. When it comes to unionizing, that kind of silence sends a definite message. (It’s not a positive one.)

Approximately 70 percent of Apple Store workers at Atlanta’s Cumberland Mall signed union cards signaling their support; in total, the union would represent as many as 107 employees. A hundred or so workers may not seem like much, but successfully organizing any union at all would be impactful for Apple.

Hiring labor-busting lawyers really shows Apple’s hand: The company, one of the most successful in the world, is scared of its employees gaining power.

Two union dreams — Though last week’s union filing in Atlanta marked the first time Apple Store employees had officially filed for unionization, there is actually another union bubbling in the Apple Store world. Earlier this month, The Washington Post reported that Apple Store employees at the flagship Grand Central Terminal store have started collecting signatures to form a union, too.

More consistent pay is one of the top reasons Apple Store employees say they’re organizing. “Pay is so unequal at the stores — there are people who’ve been in roles for less time making more than people who’ve worked in those same roles for years,” one employee told The Verge.

Here we go again — In the case of both budding unions, Apple had the same thing to say:

“We are fortunate to have incredible retail team members and we deeply value everything they bring to Apple. We are pleased to offer very strong compensation and benefits for full-time and part-time employees, including health care, tuition reimbursement, new parental leave, paid family leave, annual stock grants and many other benefits.”

Big Tech has long been unfriendly to unionization efforts, but workers in the U.S. have finally begun pushing back against that admittedly strong tide. Amazon’s warehouses are the most notable in this conversation, but employees at Starbucks, Activision-Blizzard, and Google are making waves, too.

In every one of these cases, the corporation running things has fought dirty in order to discourage workers from unionizing. The only good news there is that the media and watchdogs alike are bringing those (often illegal) tactics into the light. Apple won’t be able to get away with much without our knowing.