Blue Origin is run by a bunch of toxic bro jerks, in case you weren't aware

“[Management] is out of touch with the rank-and-file pretty severely. It’s very dysfunctional. It’s condescending. It’s demoralizing, and what happens is we can’t make progress and end up with huge delays.”

An unnamed source, speaking to WaPo 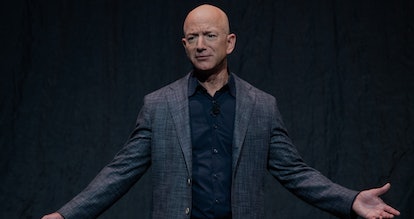 You might find this hard to believe, but Blue Origin — Jeff Bezos’ private spacefaring company that’s currently suing to delay NASA’s return to the moon — is being run by self-aggrandizing, petty, toxically masculine twerps. The stunning (stunning, we tell you) revelations come courtesy of both former and current employees speaking anonymously with The Washington Post yesterday, who detail the “authoritarian bro culture” that seeps into nearly every facet of the company’s managerial systems.

“[Management] is out of touch with the rank-and-file pretty severely. It’s very dysfunctional. It’s condescending. It’s demoralizing, and what happens is we can’t make progress and end up with huge delays,” one source explained, with others citing rampant sexism, disorganization, and an inability to keep up with competitors like Elon Musk’s SpaceX. The only solution, one expert reportedly told the newspaper, would be for Bezos to “start over” with Blue Origin. “You should be the CEO if you really want to do something, but you basically need a new executive team and a totally new culture.”

Years of sexual harassment, chaos, and confusion — We know this might be difficult to picture for some, but a top-down, majority-male corporate structure competing within the nascent private space race industry has apparently resulted in some seriously godawful stories from within Blue Origin’s trenches. One former engineer at the company cited a particularly gross passing comment from a co-worker that went unchecked, along with multiple sources relaying a general sense of instability and lack of focus for taking on their rivals.

A growing gap between Blue Origin and SpaceX — The specter of SpaceX looms large over Blue Origin, with Bezos reportedly voicing very real concerns about his company’s ability to take on the undisputed leader in private space travel. Say what you will about Elon Musk himself (you’ll get no pushback from us), but SpaceX is an extremely well-oiled machine producing very real results at this point. It’s always been hard to spar with the company, but given how Blue Origin is reportedly being run, it currently stands no hope of breaking away from the competition.