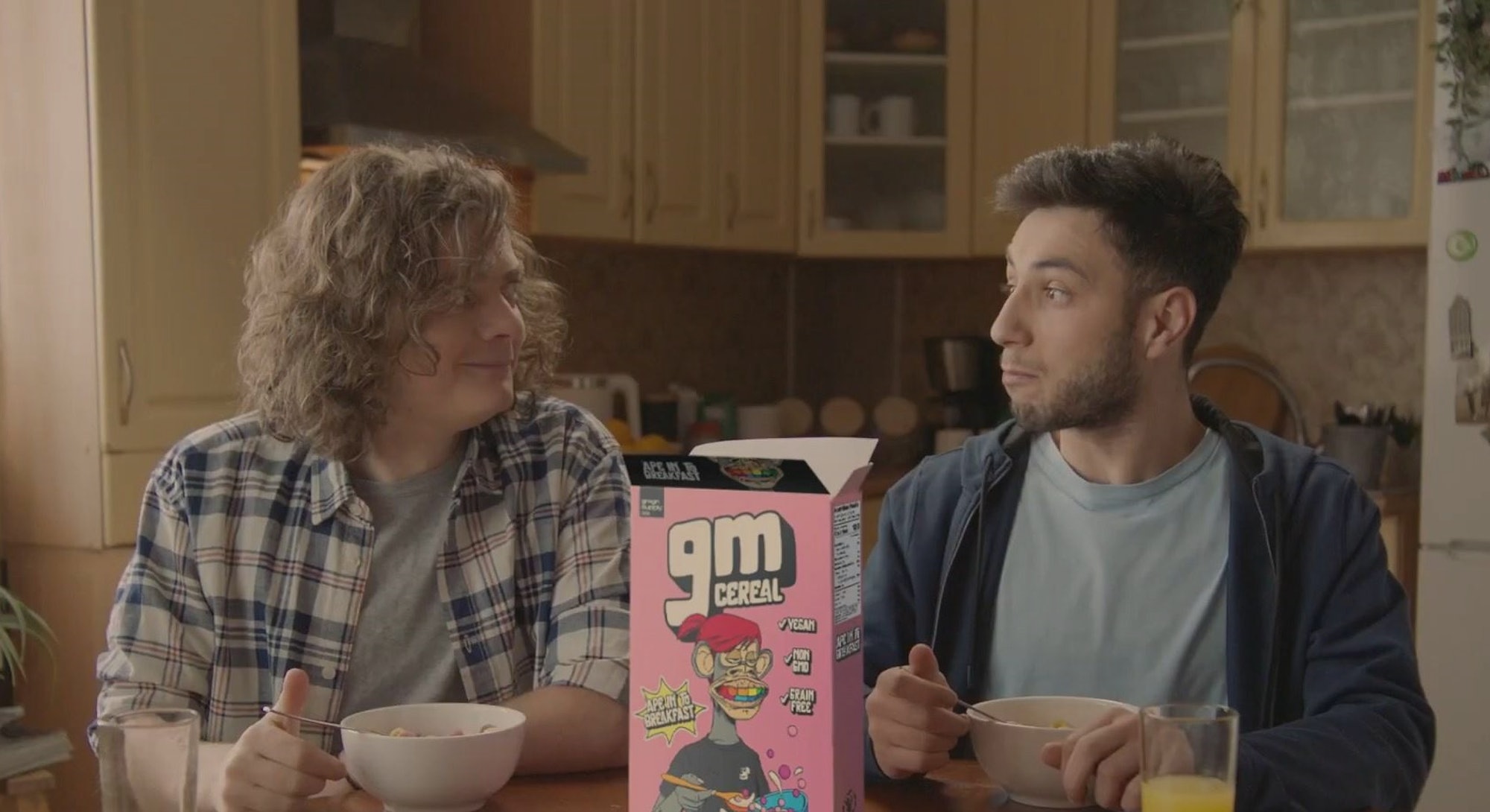 There were plenty of strange things to see at the Bitcoin 2022 conference held in Miami last month, but a real-life Bored Ape stalking the halls of the convention center was one of the weirdest.

The ape was actually an actor wearing a prosthetic mask designed to look like the NFT owned by a Canadian realtor known as Bored Becky (real name: Ashley Smith). And it was all a publicity stunt orchestrated by Philippe LeBlanc, co-founder and co-CEO of Toronto-based strategic creative agency Funday, to unveil his latest business venture: a breakfast cereal.

Gm cereal — the name comes from the abbreviation for “good morning” that the NFT community uses to greet each other — was inspired by an innocuous tweet posted in November 2021:

A flood of people replied to the tweet saying they loved the idea, while others — including independent cereal producers OffLimits — said they could help. “It was clear a DAO” — decentralized autonomous organization — “was forming in real time through the reply threads,” says LeBlanc. “That was the aha moment.”

LeBlanc says that “the real problem for CPG” is the cost of customer acquisition. In a world where the likes of Kellogg’s have built up brand loyalty over the years, it can cost huge amounts of money in advertising to wrest away customers from the established names. “You have all these great CPG upstarts that are having a hard time convincing venture capitalists they can make it because the cost of acquisition has become prohibitive,” he says.

Setting up the brand with a DAO uses the community as a marketing force, spreading information about the product through word of mouth. Though be warned, it’s all a bit complicated: After the sale of a DAO token — which automatically grants the holder a tradeable sub-DAO token and physical product for each and every gmgn supply co. release — production of the first gm cereal boxes will begin this summer. If you want to just buy an NFT of the cereal, you’ll get the physical product, plus the relevant sub-DAO token. All sub-DAO tokens give you a share of the related products’ sales revenue.

Gm cereal is part of a burgeoning trend in the food world. Last month, restaurateur Andy Nguyen launched a pop-up fast food outlet called Bored & Hungry. Nguyen spent nearly $387,000 on one Bored Ape and two Mutant Apes that adorn the establishment’s burger boxes, fry holders, and soft drink cups. And, as Input has reported, even more NFT restaurants are on the way.

LeBlanc isn’t even the only one in the NFT breakfast space. In August 2021, Brad Klemmer — the founder, managing partner, and creative director at Clay, a San Francisco–based digital design and branding studio — came up with the idea of Bored Breakfast Club, dubbed “Web3’s first NFT coffee subscription.”

Each of Bored Breakfast Club’s coffee packages is emblazoned with a Bored or Mutant Ape that the company has purchased. “There’s a lot of Bored Ape Yacht Club holders that are doing a lot of interesting things with their IP, and we wanted to be a part of that,” says Klemmer.

Members buy an NFT that gives them the right to a regular subscription delivery of coffee made by Los Angeles–based roasters Yes Plz Coffee. The NFTs were minted in early January, and the first blend of three produced so far shipped out the next month. The second blend shipped in early April, with the third shipping imminently.

A share of royalties from NFT sales, plus some profits from coffee and attendant merch, go into a Community Coffee Wallet that is constantly topped up. Once it gets big enough, a new blend of coffee is produced and released. Klemmer says he considered launching a DAO, but decided against it because of a lack of skills to develop one at present.

“There are so many possibilities here,” Klemmer says. “Right now, the entire NFT space is primarily built around investment and speculation and things like that. But I feel like the underlying technology has the possibility to really change some of today’s existing business models.”

LeBlanc hopes to gain ground on his more established competitors by using the brand loyalty built up for Bored Apes. He believes the involvement of prominent community member Smith (who owns Bored Ape #2355) is critical and establishes a new model that other IP holders will follow.

“Lending her character is no different to Michael Jordan in the past lending his character to Wheaties,” he says. “It’s that kind of same idea, but the new generation will see more affinity with these Bored Apes and virtual characters than they would with old Hollywood stars or athletes.”

Neeraj K. Agrawal, director of communications at Coin Center, a Washington, D.C.–based cryptocurrency think tank, expresses some skepticism. “I think there’s an idea that eventually the individual characters will be understood to be distinct,” he says. “But I don’t think the [general] public will at any time soon start distinguishing the characteristics of an Ape with an eyepatch and say, ‘That’s not associated with the restaurant, it’s with that cartoon or cereal.’”

There’s another major issue: Web3 and the world of NFTs is still pretty insular. Four in 10 people don’t even know what an NFT is, which is a downside for an Ape-branded product. But perhaps that won’t matter, given the enthusiasm of the NFT crowd. Klemmer describes “the level of engagement” in the Web3 community as “insane.”

“As someone who works a lot in the direct to consumer e-commerce space,” he says, “that’s your dream: To have a group of people that are so passionate and excited about your project they’re willing to join a community and be advocates for your brand.”

The remaining 40 percent would be split among DAO members as they do work to support the project. “Every quarter, you have certain tasks to perform, and if you do a certain task, you get up to your maximum revenue share amount, and if you don’t, it goes back into the treasury, and that can be invested back into marketing,” says LeBlanc.

It’s a model he hopes will map over to other products. “The idea is anything from coffee to deodorant to toothpaste,” LeBlanc says. “There are so many CPG products out there. Our goal is to kickstart the first one, then have the DAO members vote on [what items come next] and raise their hand. We already have DAO members that could be suppliers for the next product.” He says DAO investors include people in the vitamin and smart water space.

LeBlanc doubts that you’ll see profile picture (PFP) NFTs advertising every type of product on supermarket shelves. “I think there are some products that it’ll lend itself to super-well, and then maybe some others where it may not be the right fit,” he says.

But for those products that are the right fit, he predicts robust sales. “These things have virality built in,” he says. “It spreads faster, and cuts down on the cost of acquisition. It can play by different rules — or a different game.”