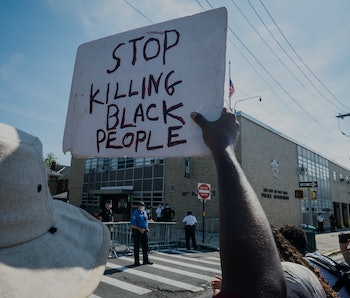 Once upon a time, microsites were mainly a way for celebrities, influencers, and members of the press to get around solo links in social media profiles or not deal with the hassle of building a full personal website. This year, Linktree, Bio.fm, and especially Carrd have become the go-to tools to aggregate resources, from unlearning racist ideologies to donating to those in need.

The perils of 2020 — The shift in the way Carrd is being used can likely be attributed to the global hellscape of 2020. Looking beyond COVID-19, Black Lives Matter protests, or the recent devastation in Lebanon, this is also the year Australia’s bushfires escalated to an international crisis, the war in Yemen has reached a fever pitch, and Hong Kong is still protesting China’s encroachment — and that’s just scratching the surface. With events happening so quickly and people wanting to respond to them as rapidly, microsites are having something of a moment.

AJ, who wishes to only be referred to as "the guy who built Carrd," says these kinds activism-based microsites have always been around. Caard launched in 2016, and has gradually built a userbase, but he's definitely noticed an uptick this year.

"The more organized 'here's what you need to know and here's how to help' style, for lack of a better descriptor, is a fairly recent development and one that I think is very effective," says AJ, and he's "surprised in that I didn't anticipate this particular use case, but not too surprised given how its mix of features lends itself to quickly getting something out there when stuff happens."

Black Lives Matter Carrds are probably the most common ones you've come across in the wild. They often link to each other, especially when one covers a resource another might have overlooked. In the first wave of police brutality protests this year, many mistakenly donated to the Black Lives Matter Foundation. As people tried to direct the funds to the people on the ground, Carrds started to include more links to local BLM chapters or become exclusively dedicated to bail funds.

The power of a microsite — The same reasons people turned to link aggregators and microsites before still apply to how they’re getting used lately. The setup process is far less involved than setting up a full-blown website which also means it can be updated on the fly or even on the go. As more resources become available (like protesting tips), or if previously listed ones prove to be problematic (like Shaun King or Campaign Zero) or not as directly helpful as others, sites can be easily updated accordingly.

AJ thinks Carrd's "sections" are one of its hallmark features for these protest or philanthropic-based microsites because they simulate the appearance of multiple pages in a one-site web experience. He acknowledges that — unlike the people using it — this feature is hardly revolutionary, but the intuitive way it works when building a Carrd on desktop or mobile sets it apart.

Additionally, while having a .wix, .squarespace, etc. in your website’s URL might convey a lack of professionalism in some settings, there’s no shame in a microsite’s brand hitching a ride. When many of the microsites are encouraging donations, not paying for a domain name is hardly considered a knock against the creator’s effort or the cause as a whole. As a result, these microsite companies have gotten waves of free advertising, and Carrd is the clear leader of the pack.

But will Carrd be able to survive whatever comes next? The speed of its ascent is reminiscent of TikTok's explosive growth. But like TikTok, all it takes is an even more agile newcomer (or a fragile administration) to change Carrd's fortunes. That's simply the risk any fundamentally online business takes. For the time being, though, Carrd's star is rising, and it's managing to do some good in the process.

Update: This story was updated to include comments from Carrd.