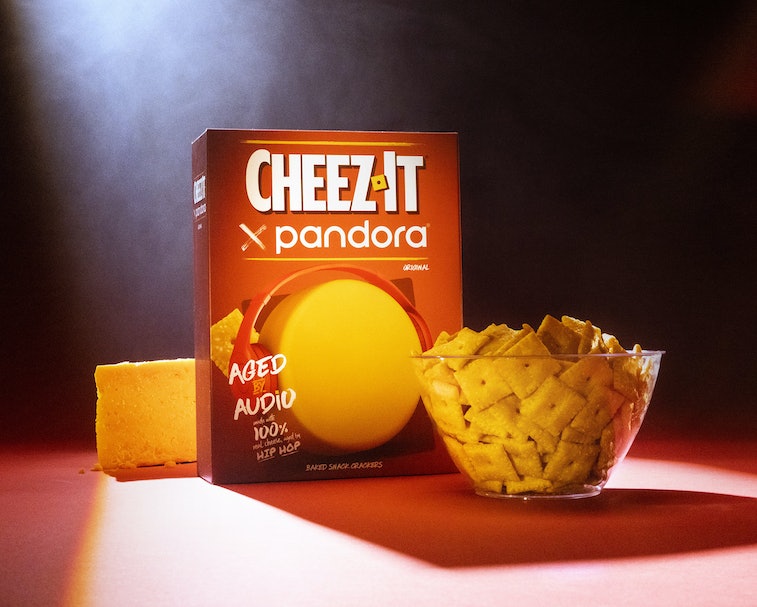 What if we told you that the one thing holding your cheese plates back from achieving a sublime state of taste was a lack of hip-hop? That’s what sound arts students found and published in a Swiss study from the Bern University of the Arts (HKB), Käsehaus K3 (a Swiss cheese shop), and food technologists from the Zurich University of Applied Sciences (ZHAW).

In an attempt to take advantage of the food-science experiment, Cheez-It has partnered with Pandora to release a limited-edition run of cheese crackers that have been aged over the course of six and a half months while playing a curated selection of hip-hop. The brand notes that this process was carried out “in a secure location” — which makes the whole thing sound a lot like a governmental weapons-testing project.

The “Aged by Audio” Cheez-Its will be available on May 26, through Cheez-It’s official site, and they’re set to arrive in conjunction with a mixtape that was put together by music and sonic experts at Pandora. This tape will be accessible through Pandora on the same day the snack drops. The companies have tapped Sway Calloway (host of Sway In The Morning on SiriusXM) to “introduce fans to the first-ever hip-hop-infused snack.”

What about that study?— While the culinary art experiment that’s serving as the bedrock for this collaboration is being treated as a definitive piece of text, the study itself recommends an additional investigation with a larger sample. The results of the experiment suggest that cheese exposed to hip-hop “displayed a discernibly stronger smell and stronger, fruitier taste than the other test samples.”

During the study, a variety of semi-hard cheeses were exposed to different types of music during the maturing process, with hip-hop being the most influential genre as far as smell and taste go. We have lots of questions. What songs were being used? Was it a mix of ‘90s and early ‘00s classics? More modern sub-genres? Hopefully this study won’t be weaponized by lyrical-rap obsessives to push the agenda that J Cole is the greatest modern rapper.

This is not the first time hip-hop has been used by the food industry to gain some sort of media attention. Wendy’s released a five-song EP in 2018 to capitalize on a cringey Twitter exchange; Hamburger Helper did the same thing two years prior, only there was no backstory there — just an April Fool’s opportunity.

More like this
Will Gendron
6.16.2022 9:00 PM
Culture
Anna Sorokin hopes to part with scammer identity by... pivoting to NFTs
Jessica Lucas
6.24.2022 1:25 PM
Over the top
Devon Larratt and the dramatic rise of arm wrestling YouTube
Cheyenne MacDonald
6.10.2022 10:54 PM
Wack
Postmates' Bottom-Friendly Menu might be cool if it didn't rip off a queer creator