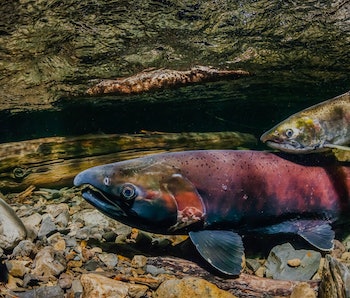 The Pacific Northwest is home to numerous land and water animals. One of them, the strong-bodied coho salmon, seems to be in trouble. According to a Popular Science report, scientists at the University of Washington in Tacoma and Seattle have learned that human activity involving chemicals in stormwater is destroying the salmon's ability to migrate through waters and live. The compound appears to be the result of tire rubber reacting to ozone, creating toxic content.

The pinkish-magenta chemical substance is known as 6PPD-quinone. Normally, this compound helps increase the durability of tires. The presence of these chemicals in waterways, however, is destroying the essential migration and reproduction potential of coho salmon in the region.

Natural homes turn uninhabitable — The migration pattern of coho salmon is a Herculean affair. These fish have to swim massive and divergent bodies of water to sustain their own longevity. As anadromous fish — which means the coho salmon's primary abode is freshwater; they are born and raised in it — they end up living a good deal of their adulthood in the ocean.

Eventually, like aquatic pilgrims, they return to their childhood homes to have their own families. These travels between marine and freshwater environments mean the coho salmon are adaptable and hardy, but as the researchers note, the compound of 6PPD-quinone is making their travels fatal. Environmental engineer and chemist Edward Kolodziej, who conducts research at the University of Washington in Tacoma and Seattle, notes that 6PPD-quinone is possibly the hazardous chemical that is hurting the salmon but also other water animals.

Prior to this study, Kolodziej and his peers noted that urban creeks are essentially death traps for water creatures due to the growing presence of manmade materials. The chemical composition emanating from roadway runoff ends up polluting these animals' primary homes. The die-offs, in particular, make the once-safe water dangerously toxic. For young coho salmon, this is even more precarious as the study notes that they die "within several hours" once they show the symptoms of being exposed to the toxic material, including difficulty breathing and erratic movements.

Cleanse the water — With this study, scholars want to educate the public on how to treat urban runoff. And they're hoping charcoal can be used to clean stormwater, and limit the effect of toxins on the creatures than depend on unpolluted water for their lives.