“We may be able to help rewrite the future of what it means to be disabled. How do you weigh a trade-off as gargantuan as that?” 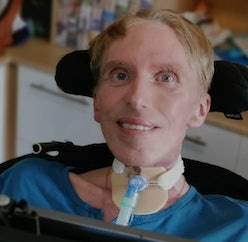 Dr. Peter Scott-Morgan, the roboticist who became known as the world’s most advanced human cyborg in his radical fight for bodily autonomy in the face of terminal illness, has died after a five-year battle with ALS.

On Wednesday morning, a tweet from the British-American scientist’s account announced: “With a broken heart, I’m letting you all know that Peter passed peacefully surrounded by his family, and those closest to him. He was incredibly proud of all of you who supported him, and his vision of changing the way people see disability.”

As a champion of experimental procedures designed to keep him always a step ahead of the disease’s effects, Scott-Morgan’s impact on our still-growing understanding of ALS treatment and the case for individualized care writ large is impossible to overstate — a testament to what can be achieved when armed with one’s remarkable will to live.

Incurable optimism — Since his 2017 diagnosis, when he was told he had just two years of life left, Dr. Peter Scott-Morgan and his team of “Rebels” worked tirelessly to create and implement advanced technological solutions for all aspects of living as his body stopped working bit by bit. ALS, also known as Lou Gehrig’s Disease and Motor Neuron Disease (MND) in Britain, is a cruel and as-of-yet incurable illness that causes the degeneration of the body’s motor neurons, the cells that signal muscle control and movement from the brain. As the motor neurons deteriorate, paralysis spreads progressively throughout the body, from the limbs to, ultimately, the muscles that control critical functions like breathing and swallowing. In its later stages, ALS patients become “locked-in” — trapped in their bodies while the mind continues on unabated.

Yet despite the undeniable horrors ALS would bring, Scott-Morgan met the incurable disease with an equally “incurable optimism,” as those close to him called it in Input’s 2021 profile on Scott-Morgan and The Rebels.

He and his global team of experts — often working against the advice of doctors who dismissed his proactive approach — spearheaded the development of high-tech disability aids, sometimes at high personal risk. He underwent an unprecedented “triple-ostomy” in 2018, a combination gastrostomy-colostomy-cystostomy all at once to preempt difficulties in nutritional intake and the need to relieve himself. He had his voice box removed, and the team developed an avatar and synthetic voice clone that would allow him to speak and convey facial expressions via a screen worn on his chest. He relied heavily on AI-powered text generation software and was working to bring AI control to his already advanced robotic wheelchair. In October 2019, he officially recognized his transition to “Peter 2.0.”

“Society just expects people like me to statistically curl up and die on cue,” Scott-Morgan said in his interview with Input last year, then age 63. “Instead, I intend to be a human guinea pig, to see just how far we can turn science fiction into reality.”

An enduring legacy — Like Stephen Hawking before him, Dr. Peter Scott-Morgan came to be a hero in the eyes of many ALS patients and their loved ones. In his refusal to simply accept the fate he was dealt, he forced change in a rigid healthcare system and opened doors for patients like him that previously stood as impassable barriers. Last year, he published a book on his journey to becoming what he excitedly referred to as a human cyborg, and his work in patient advocacy continues through The Scott-Morgan Foundation.

Scott-Morgan made a promise and dedicated the final years of his life to keeping it — even if that meant using an artificial proxy: “My smile will be the last thing to disappear.”