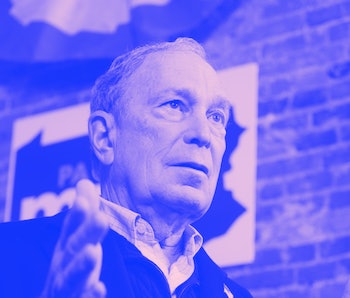 Michael Bloomberg, former New York City Mayor, founded an advertising firm earlier this year and poured millions of dollars into it. Former Facebook chief marketing officer Gary Briggs was one of the first hires and Foursquare’s ex-CEO Jeff Glueck joined him in early December, according to CNBC.

In addition to running Bloomberg’s ads for his presidential run, the company, Hawkfish, is meant to provide digital support for future Democratic candidates to combat Republican’s advanced strategies.

Put your money where your mouth is — This isn’t the first time Bloomberg has thrown money at Democrats’ comparatively weak advertising game. The 2018 midterm elections saw Bloomberg’s PAC Independence USA bring 21 out of 24 candidates to victory. Whether through the PAC or personally, over the years, Bloomberg’s backing has helped 45 out of 54 candidates become elected officials.

When Hawkfish launched this spring, it worked on Democratic races in Virginia and Kentucky. Though none of the involved parties provided CNBC with specifics, the Virginia statehouse flipped to Democratic control and Democrat Andy Beshear became governor of Kentucky.

Bloomberg’s campaign — Since November 21, Hawkfish has been an integral part of Bloomberg’s presidential bid. Campaign spokesperson Julie Wood told The Verge that the firm is handling all of the campaign’s ads “providing digital ad services, including content creation, ad placement, and analytics.”

Bloomberg has already spent millions on ads and still only polls at about 5 percent in the Democratic race. If he could get over recent NYC mayors’ obsession with the White House, Bloomberg’s money could be better spent on another candidate instead.