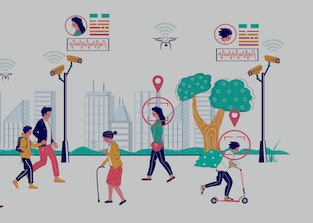 How much Portland, Maine, will pay citizens subjected to facial recognition by cops.

According to The Bangor Daily News, Portland, Maine, has passed a measure that is a win for anti-surveillance groups as well as private citizens who don’t want to lose their privacy to the facial recognition technology industry. That measure means Portland has officially banned the public use of facial recognition software.

Private citizens will be given up at least $1,000 in compensation if it is determined that law enforcement authorities used facial recognition on them without their explicit knowledge and consent. The ordinance cannot be revoked for the next five years. It's a loss for the likes of Microsoft, Amazon, and Clearview AI — all firms that have attempted to sell their facial recognition software to local authorities in the past. But, some of which has put moratoriums (usually temporary) on doing so, whether for the optics in the current climate, or to assess the likelihood of their misuse.

What you need to know — In August, a city council vote called for a preliminary ban on the public use of facial recognition in Portland, which would include local use by either the police or city government. Initially, the vote didn’t stipulate enforcement provisions. Eventually, by adding those provisions, it gained more public awareness and legal power by demanding restitution for anyone affected. A volunteer with People First Portland, Glen Gallik, told the press in October that legal repercussions made the proposal much more effective.

What happens now — The measure comes alongside other progressive demands, which involve a limit on rent hikes and a $15 minimum wage. With these particular moves, city employees could face professional termination or suspension if they are found guilty of violating ordinances.

With this news, Portland has joined the likes of Boston, Oregon, and San Francisco in limiting public use of such software alongside New York, which has banned the use of facial recognition technology in schools for the time being.

As technology evolves, privacy advocates are coming up with legal measures as well as DIY hacks against surveillance software that essentially uses your face to invade your privacy and, potentially, infringe your civil liberties. Consider COVID-19 face masks or this AI tool. If advocates continue to put pressure on city councils, we might see most of the United States rule against public use of facial recognition programs. That in turn might make our surveillance-riddled hellscape a little less terrifying.