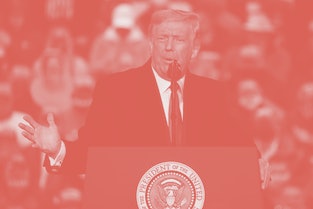 The estimated number of lies Donald Trump has told since 2016.

"As of Aug. 27, the tally in our database that tracks every errant claim by the president stood at 22,247 claims in 1,316 days," explains the article, going on to postulate that during this home stretch of the election campaign season, Trump is averaging around 50 bald-faced, publicly proclaimed lies per day.

The piece is careful to note the importance of that date at the end of August: Trump spews so many objectively false statements on a daily basis that those working on the project are now facing a massive backlog of inaccuracies, and struggling to catch up. And by the time the project does catch up, the number will exceed 25,000. Considering four years in office is ~1,460 days, that comes out at an average of 17 lies each day. Each and every day.

Business as unusual — The Washington Post's Fact Checker team, overseen by its longtime political reporter and editor, Glenn Kessler, first debuted during the 2008 Presidential election, but has risen to far more prominence during the Trump administration's era of "alternative facts" and "fake news." Moreover, the project has never had this much work to do.

The service became an emblem of #resist culture practically since the first day Trump spent in office. The website's cheeky "Pinocchio" rating system for a lie's severity (ranging from a one Pinocchio indicating "Some shading of the facts" to four Pinocchios' worth of "Whoppers") has attempted to inject a degree of smarmy levity into the dire situation that's played out over the last four years. It's incomprehensible that the leader of the free world has such scant regard for the truth, or for his duties as President.

Trumpian politics commodified — Donald Trump passing this Bullshit Event Horizon isn't noteworthy. Or, at least, it shouldn't be. Trump is capitalism's perfectly evolved final form, a streamlined, apex predator fueled by self-interest, conversational manipulation, and obfuscation. Like a shark, he faces no true threat in his ecosystem other than old age, infirmity, or the chance encounter with an even bigger shark (which usually amounts to a legal team brandishing fresh sexual assault claims).

The only thing truly newsworthy about covering Trump's pathological lying by now would be if he suddenly started admitting the truth about literally anything — but that would be as unnatural as if a great white shark suddenly opting for a kale salad over a seal pup.

Let the record show — This is not to imply that society shouldn't be holding our elected officials accountable, even if only for posterity's sake, or that this kind of documentation isn't a necessary endeavor. But the semi-regular updates that, yes, the most powerful pathological liar in the world continues to lie with impunity, aren't going to save us. No amount of documentation regarding the man's dishonesty will change anyone's minds about how they're voting. If you didn't think his pathological lying was a problem before he hit 25,000, you're unlikely to have changed your mind since.

It occupies space in an already overcrowded news cycle, reinforces said notions of impunity, and if anything, provides sneer-fodder for Trumpists and their surrounding sycophants. The fact-checkers won't help to save our Republic before it breaks entirely — a Republic that allowed something like Donald Trump to evolve and flourish is already broken.

A black hole is known primarily for its abilities to warp space and time. By The Washington Post's metrics, we officially passed the Bullshit Event Horizon on August 27, an understandable sentiment given the weight of Trump's lies. For many other observers, however, we knew this singularity of lunacy was an inevitability.