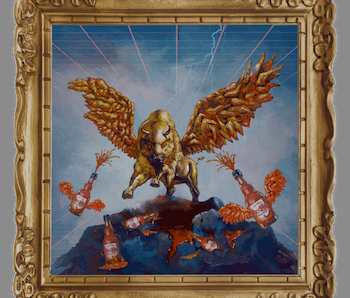 The broader NFT inundation is getting a little out of hand — there are luxury brands getting involved, every professional sports league in America wants a piece of the pie, and even a satirical response to the trend has begun. So where does that leave the brands and individuals who have yet to introduce a collection or announce that they too, are entering the space? Look no further than Frank’s RedHot to get an idea of what’s next.

While we’ve seen food-related NFT projects come out of the woodworks, like the existing Olive Garden collectibles that were established on OpenSea by a community of fans, Frank’s is being handled by its parent company, McCormick & Company (MKC). And instead of releasing digital art onto an online marketplace, the whole goal of the Frank’s RedHot NFT is to tie it into a real-world event — the Super Bowl in this case.

Ahead of the big game, users are encouraged to consume buffalo wings (ideally flavored with Frank’s RedHot) and then scan photos of the bones, which will earn them “Bonecoin,” a spoof cryptocurrency that holds no intrinsic value. Whoever can amass the largest amount of “Bonecoin” will then win the Frank’s RedHot NFT and its edible counterpart, the eNFT.

So it’s just an internet challenge then? — More or less yeah. In fact, it seems there’s less of an emphasis on the NFT itself rather than the edible replica, and MKC is hoping people go through all the hoops in order to get their hands on it.

In order to participate, people will have to visit Bonecoin.com, create an account, and then start uploading images of the carcasses of their chicken wings to mine “Bonecoin.” The challenge kicks off today and will last through the end of the Super Bowl on February 13.

You’re probably wondering what the NFT looks like. It’s the image that was used in this article header but here’s another look, just so you can really imagine what the edible version can or will be.

As far as NFT projects go, this one is pretty innocuous and reads more as a brand’s attempt to earn engagement by playing into the buzziest ongoing trend.