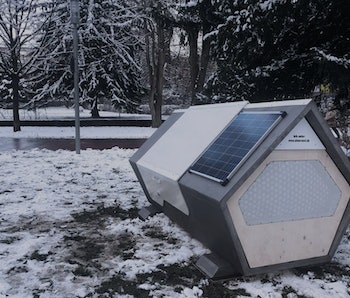 Ulm, Germany is testing a new initiative to protect its unhoused population in the dog days of winter. Ulmer Nests are pods meant to protect people without homes from the elements, particularly to prevent frostbite.

Depending on how successful the project is, it may become a national initiative, but even its creators acknowledge the pods are for emergencies and catching people who go undetected by social welfare systems. It’s an important innovation for short-term safety as the nation struggles to address a growing issue.

This nest is also a net — The Ulmer Nests are made from a combination of wood and metal to be windproof, waterproof, and easy to clean. People won’t need keys to access the pods, but they are locked during the daytime until 6 p.m.

The pods can hold up to two people and are designed to support people who might avoid traditional shelters for psychological reasons or in order to keep caring for a pet. In the U.S., shelters can also be gendered or have age limits on children, often making them inaccessible for many unhoused parents.

There are no cameras in the pods, but a motion sensor lets local social workers know when one is in use. The next morning, they visit the pod, offer its inhabitant(s) assistance, and notify cleaners so it can be ready for use that night. In a trial run, this has helped unhoused people get a sense of routine while also eroding the feeling of being cast aside by society.

The nests aren’t perfect safe havens; they rely on body heat and can still get to dangerously low temperatures. They also include solar panels, but these mainly supply power to a radio network so people can communicate without needing a cell phone. Additionally, they may not be ideal for those with claustrophobia and physical disabilities.

Band-Aids are good, cures are better — Germany’s unhoused population has been on the rise for years, partially fueled by the country’s inability to match the creation of new housing with growth of major cities as well as an influx of refugees. The latter is fodder for the country’s right-wing, making refugees scapegoats for the government's decades-long abandonment of social housing in favor of private housing investments.

In 2018, Chancellor Angela Merkel earmarked 5 billion Euros to build 100,000 new social housing units by 2021. As of 2019, there were approximately 650,000 unhoused people in Germany, and the Federal Association of Homelessness Help’s managing director said the country would need to build 200,000 subsidized housing units a year — roughly half for social housing and the rest for affordable housing.

Emergency shelters like the Ulmer Nests will help many survive Germany’s winters and get them into the system, but the efficacy of that system seems limited at best.